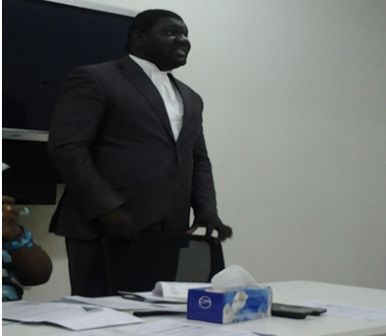 Airtel on Wednesday 17th July held a press conference at their HQ Office at Hill Station to allay the fears of the general public on the unfair attack by Sierra Leone Police (SLP).

Speaking at the conference, Madam June Rose Johnson said that Airtel is a law abiding institution and it was a shock for the company to be tagged by the police through the media.  June Rose revealed that AIG Morie Lengor alleged that the company has not been complying with them in the execution of their duties; she added that Airtel was shocked to have received such blame from a senior officer of the force.

Legal and Regulatory Head, Gerald Cole Esq., said  Airtel is committed to the laws of the country. He cited Section 22 of the Telecommunications Act of Sierra Leone which states the confidentiality of communications and Section 37.1 paragraph C, which deals with the right of consumers.

Gerald pointed that it is in his company’s interest to obey the laws of Sierra Leone and furthered that the Confidentiality Act, states in 15.3 (a) that the LICENSEE must ensure confidentiality of information supplied by its customers or by third parties, and not to disclose it without the customers’ prior written consent to do so, with the exception of information requested in writing by the LICENSOR and backed by an order from the High Court and in (b), Confidential information shall be used solely for the purposes for which it was disclosed.

He argued that there has never been any situation wherein an organization has contacted the company without going through the correct constitutional process for information and has not received a positive response.

Head of Airtel Money, Olayemi Jinadu, said that over 90% of the population of the country does not have access to financial services. “Airtel Money is regulated by the Bank of Sierra Leone and partners with three banks.  It is in our interest to make all stakeholders happy.  Our services are secure and have bank grading services.  All Airtel Money account holders cannot access their account without their pin code,” Olayemi assured, and noted that customers are assured of security in Airtel Money transactions.