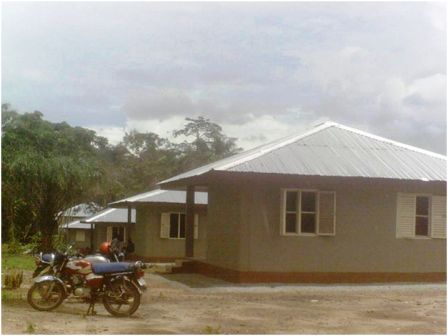 African Minerals Limited has officially handed over standard houses to the relocated families at Masorie Village in the Lokomasama Chiefdom, Port Loko District. The ceremony was held on Wednesday 17th July 2013. The relocation project was undertaken after the company had followed all international best practices that resulted to constructing suitable houses for the relocated people.  (Photo: The new houses at Masorie Village)

The entire project, which cost Le765,000, 000 (seven hundred and sixty-five million Leones) was undertaken by TS and Co Limited.

Musa Alie Bangura is AML’s Social and Community Manager. He lauded the fact that the structures are erected in his native community. He added that the Executive Chairman of the company is committed to transform the lives of Sierra Leonean, noting that the project at Kamasondo Section serves as a novelty to the people. Mr. Bangura urged the people to maintain the houses so as it benefit generations yet unborn.

The Social and Community Manager admonished the people to protect AML and ensure that they report theft and other antisocial activities that serve as threat to the company’s operation to the police and other local authorities.

African Minerals’ Head of Communication stated that the project is part of the company’s corporate social responsibility. Anthony Navo Junior said the people must count themselves lucky to have been moved from thatch houses to modern structures that will serve them and generations yet unborn. “The houses belong to you and we don’t want anybody to come after the company requesting for maintenance,” he said, and added that the company will not relent in its good relationship it has enjoyed with the people of Pepel over the years.

The Managing Director of TS and Co Limited, Thomas S. Koroma said the project should have been completed within eight week, but due to some constraints they have to complete it within three months. “The work would not have been completed if we hadn’t the support of the community,” he said, noting further that the houses are constructed with high standard quality materials. Mr. Koroma noted that this is all about changing the standard of the people. He advised the beneficiaries to take good care of the houses.

Honourable Kombor Kamara of Constituency 56 said constructed standard houses for the relocated people is not a new phenomenon undertaken by African Minerals, adding that the company has crossed 70% of employment in Likomasama Chiefdom. He informed AML officials that he will serve as a key figure in monitoring the maintenance of the new houses. The Political Messi of the All Peoples Congress Party in Parliament urged unemployed youths to be patient with the company, which has encouraged the formation of a committee that oversees employment facilities in the entire chiefdom. Other speakers include the Paramount Chief of Lokomasama Chiefdom, Lamina Baimaro Ngbathor II.

However, the company announced the commencement of work on the community hospital, market and club house. Football kits were also donated to the Young People in Pepel to enable them develop a football team and bring both youth and AML officials in a common platform to discuss the challenges faced and map out possible solutions.

Also, the company donated 5 bags of rice, 5 bundles of zinc, 20 bags of cement, 20 sheet hardboard, and Le10m (ten million Leones) to victims of a fire disaster, which occurred in Pepel Town.