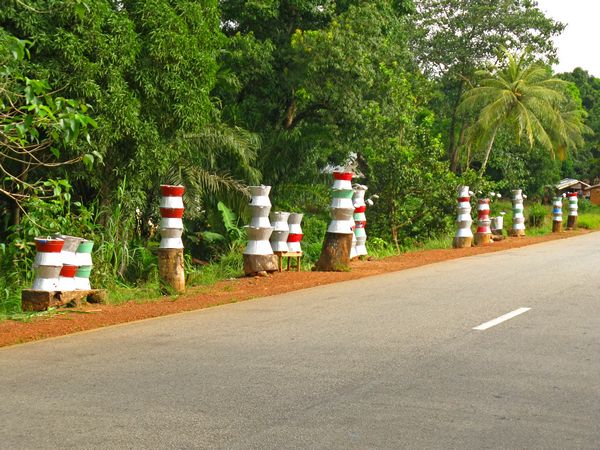 Lunsar – July (SLENA) – A road accident has claimed the lives of two people along the Makeni/Lunsar highway.

It involved a Mercedes Benz van with registration number AGT 093 which was driven by one Alhaji Kamara of Makeni heading for Freetown with about 16 passengers on board.

Mohamed Kamara, an apprentice and Peter Chernor Koroma both of Makeni, lost their lives at Komrabi village along Makeni/Lunsar highway when one of the rear tires of the vehicle exploded.

The driver lost control of the vehicle, which somersaulted several times before it finally crashed off the road.

Police Sergeant 4812 Bangura Abu of the Lunsar Police Station who is investigating the matter said the accident cannot be unconnected with excessive speeding.

He told SLENA in an exclusive interview that the other injured passengers were rushed to the Mabenthan Hospital in Makeni and were responding to treatment.

In a separate development, the Paramount Chief of Buya Romende Chiefdom in the Port Loko District, Bai Bamtha N’kenedy II has expressed concern over what he referred to as the deplorable condition of the road network in his chiefdom.

He made this particular reference to the Foredugu Roktorlor road which he said is more of a death trap. The chief explained in an interview with SLENA that the road is so inaccessible that it has travelling to the area very difficult and costly.

He said the situation is exceptionally bad for the aged, sick and pregnant or lactating women who may want to go for medical treatment from their respective villages to any of the Health facilities around.

The Paramount Chief on behalf of his subjects appealed to the government and the authorities concerned to seek ways through which the problem can be addressed especially now that the month of Ramadan has come.

The Foredugu/Rokturlor road was constructed by the Seven Shrine Construction Company about a year ago but had hardly served for more than six months.