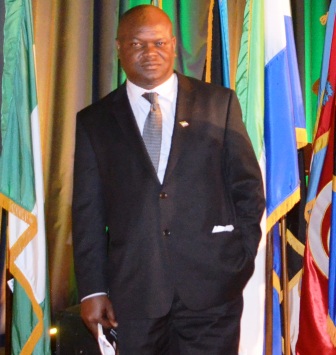 When an international  institution “Transparency International” published its concocted global graft indicator, I knew that it had finally run out of luck, because it was never going to get away with its usual shenanigans, because those days wherein international organizations will sit in their cocoons and just think of any number and associate it with performance of any country have past- as enlightened government officials in many Countries have no patience to condone and accommodate such vice. (Photo: Pasco Gerald Temple, IA, USA)

It is important to note that many countries in addition to Sierra Leone, including Taiwan, Ghana, Malawi, and Liberia have strongly reacted to the mischief-maker’s (Transparency International) recent anti-graft index.

Even its own Executive Director (Lavina Banduah) in Sierra Leone, played the Pontius Pilate tactic by washing her hands in vain – off the report  and acknowledged the fact that its report lacks credibility.

In an interview with a local daily, the executive Director said, “We were not directly involved in the exercise; it was conducted by a company called RMS Africa which was contracted by Transparency International to do the surveys for Sierra Leone, Cameroon, D.R. Congo, Senegal and Liberia.”

Granted that her team in Sierra Leone did not participate in the survey and compilation of the report: who gave the team (RMS Africa) hospitality when it arrived in Sierra Leone?

Who helped with the team’s deployment? Who coordinated and supervised its activities while in Sierra Leone? If you never participated at all: then why are you in the office?

According to Minister of Information and Communication, Hon. Alhaji Alpha Kanu ‘the corruption perception survey done by Transparency International was invalid and unreliable. ‘

Hon. Minister Kanu in no uncertain terms challenged the result of the survey, and said “the sample size that was obtained in the survey is inimical to the existing situation in the country.

‘The sample used is mathematically invalid and therefore the Institution that carried out the survey is not credible. The executive director in her own words during the interview confirmed serious efforts in the area of combating graft by the Country’s Anti-Corruption Commission.

Which is why I think the action to tarnish the good image of the government by Transparency International is not only a calculated effort, but deliberate.

In this particular era of the President Ernest Bai Koroma, “Newton’s Third Law of Motion” “To every Action, there is an equal and opposite reaction” is fully applied.

Apparently, to put a break to some elements who are struggling to gain importance and recognition; to stop people who can chose to rant, because he/she has access to a medium, where sympathy is a significant partner: where titles are given without any reference to academic, administrative or media rules: to halt perfidious elements with an intent to impugn on the integrity of people with impunity based on their ignorance and desperation for jobs.

It is important to note that Sierra Leone is not left alone in the application of Newton’s Third law of Motion, other Countries affected by Transparency International 2013 report, replied accordingly.

Malawi police are also disputing the findings of the 2013 Global Corruption Barometer by Transparency International (TI) showing that the law enforcement agency is the most corrupt institution in the country.

Ghanaian lawmakers have reacted angrily to Transparency International’s latest Corruption Barometer Survey, which ranked Ghana’s Parliament among the most corrupt institutions in the country.

The survey has drawn sharp condemnation from MPs, with some threatening to have the International Corruption Watchdog before the Privileges Committee.

“To begin to contemplate a situation where a member of parliament, for discharging his legislative functions, could be described as corrupt is mind boggling… how do we come out as corrupt? I don’t understand and find it nauseating,” he stated.
According to Members of Parliament, the allegations were “very damning, and Transparency International should produce evidence.”

“It is complete nonsense. Parliament does not require money from anybody to undertake its constitutionally mandated function. “We are here and are paid for what we do… this is something we have to put before the speaker.”

In Taiwan, the 2013 Global Corruption Barometer report also sparked skepticism with its finding: as the country with the third highest percentage of corruption in the 14 countries in the Asia-Pacific region surveyed – behind only Cambodia and Bangladesh.

The doubts were further heightened when local media found that the company listed in Transparency International’s 2013 report as having conducted the test in Taiwan — Shanghai-based Wisdom Asia — denied having done the job.

Investigation reveals that Transparency International seems to be a working tool for failed politicians to not only discredit credible Governments, but also serve as a bench, which people can use as leverage to catapult to political power.