Bangura disappointed with FK Haugesund after €2.5 bid was rejected 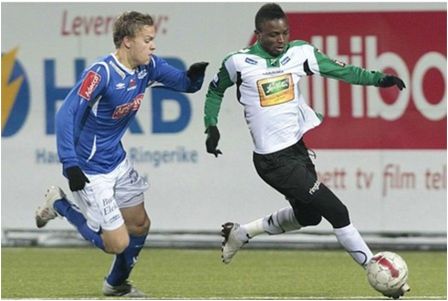 Bangura disappointed with FK Haugesund after €2.5 bid was rejected

Sierra Express Media Sports UK understands that the Norwegian outfit has rejected a bid of €2.5m  from the newly promoted English Premiership side Crystal Palace for the 25 year old Sierra Leonean.

He said “I’m disappointed; because it is my dream to play in England”.

Bangura talking to Haugesund Avis stated. “I know I am ready for a new challenge and the Premier League is a good opportunity for me.  I only have a few months left on my contract before I can go for free, so the choice should not be that difficult.”

Because Sierra Leone is now ranked below Fifa’s top 70, Bangura, who is a regular for his country, would need to qualify for a work permit to play in England.

However, despite the setback, the Sierra Leonean is hoping that both clubs will reach an agreement over the coming weeks.

“I’m hopeful because all footballers are now looking forward to play in the Premier League, the former Mighty Blackpool boy stated in an interview with Norwegian TV2.

The defender-cum midfielder has made 16 appearances for his Norwegian side in the current 2013 season.

Bangura has been playing in Norway since 2006, after he saw a move to Watford fall through when he was not granted a work permit.

Bangura had initially impressed Watford at the Under-17 World Cup, but after seeing his move to Vicarage Road collapse – they still owned him and he was loaned to Honefoss.

After his deal with Watford expired in 2008, he stayed with Honefoss before joining Haugesund in  2010.