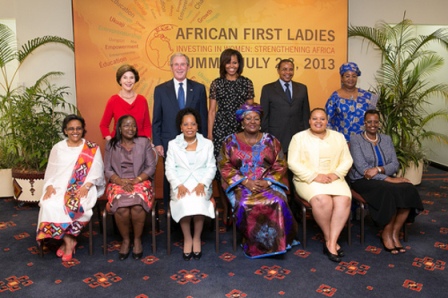 Sierra Leone’s First Lady, Sia Nyama Koroma took centre stage in Tanzania where former and current First Ladies had gathered for a summit under the theme: “Discussing investing in women to strengthen Africa”.

Sia Koroma was among other high profiled world class women leaders including the former President of the United States of America George Bush and his wife Laura Bush who were hosting the summit.

The First Lady of America Michelle Obama was also in attendance and gave the summit’s keynote address.

Speaking during a television interview that was broadcast on Sky Channel 209 in the United Kingdom and viewed by millions around the world, the Sierra Leonean First Lady said as First Ladies, they can use their unique positions of being between the powerhouse and the people to advocate for the good of their people.

“I am here to network, connect with the outside world as well as mobilising resources, support and implement programmes in our respective countries,” said Koroma who quite recently organised a summit on the empowerment of women in Sierra Leone that was attended by Nigeria’s First Lady Mrs. Goodluck Jonathan.

Sia Koroma had been a respectable figure among high profiled women around the world following her commitment and dedication towards improving the plight of women and children particularly in Sierra Leone.

The Tanzania summit aimed at raising awareness for First Ladies to commit themselves in supporting their husbands towards improving the lives of women than just making them look good in appearance.

Ahead of Nelson Mandela Internatio...