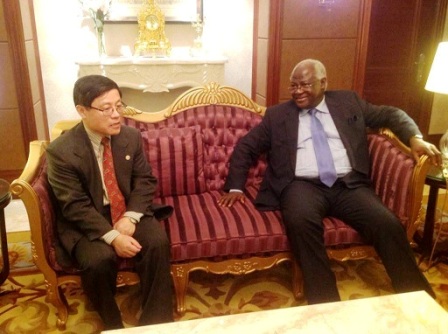 President Ernest Bai Koroma returned home yesterday from China!!  Triumphantly!!  From Lungi International Airport he drove straight to State House, and started work in his office. On Friday,  5th July, 2013, President Koroma, to be flanked  by the Ministers and State House officials who travelled with him, would host a Press Conference in State House to inform the nation about his (and the nation’s) ‘Chinese triumph’.  They are no doubt brimming with ideas as to what great developmental ideas they have seen in China which they can ‘fallamakata’ (imitate) in Sierra Leone. If President Koroma’s administration doesn’t ‘fallamakata’ the best parts of the Chinese – in agriculture; in industry; in tourism, etc. – posterity (especially today’s youth whose interest he has pledged to seek above all else)  would condemn him guilty for ‘going to China’ (‘Going to China’ in Quranic terms  mean taking great risks to go in the quest of esoteric and utilitarian knowledge) with a large delegation of government ministers and not bringing much back home.  It is likely that this generation, and, those not yet born, would always extol to the skies the developmental strides of President Koroma, and, his diplomatic savvy in romancing with China as results of his Chinese venture begins to unfold.  About the very best and most prolific of Sierra Leone’s media professionals, John Baimba Sesay (Press Attaché in the Sierra Leone Embassy in Beijing), and Jarrah Kawuse-Conte (State House Communication Unit Manager) tapped the President for information while he was still inside a plane flying over Chinese territory – on what benefits  to Sierra Leone would come from his high-powered visit to China.

In WE YONE newspaper of July 3, 2013, the interview of the President by the two intrepid journalists was reported: “….Now for the projects we had already negotiated with the Kingho Group and the Hainan Group….There was a great commitment on the part of the chairman to replicate the kind of industrial park they have there in Mongolia in Sierra Leone.  They have already signed 6.5 billion dollars agreement with the Sierra Leone government to develop a mine and a port….Again, the Hainan Project….It is also a 1.5billion dollars project that will grow rubber and embark on irrigation of rice.  We have also concluded discussion on the airport project….”.  Mouth watering offerings for the indigenous business people who are waiting to take advantage of the APC government’s ‘Local Content Policy’ (which would mean that whatever investments are made here, about 10% of goods and services would go to  businesses owned by Sierra Leoneans!!); frenetic trading awaits our energetic petty and medium-size traders who are growing up to become importers and exporters; more money in the pockets of all the citizenry is imminent;  exhilarating news for the APC  politicians – for it would mean the surge of the Sierra Leonean economy would significantly  increase the money that gets into the pockets of the ordinary man and woman, and there would be greater  satisfaction with our governing APC.  Votes galore for the APC – come 2017!!   The most excellent information from the President was the one on ‘excellence’

“You know that they have made an offer of 250 RMB, which is given to us as a grant, with a commitment of supporting the construction of the Centre of Excellence….”.  The President has yet to elaborate on this ‘excellence’ thing – but, it connotes something we all – especially children and youth – should look forward to with exciting expectation.   Sierra Leone must not only be glad in the huge quantum of investments from China, but, should primarily focus on ‘gaining’ knowledge from China, and, ‘fallamakata-ering’ China’s meteoric rise from being an inconsequential developing country some 70 years ago into a Big Power today.

Of course, in this day of internet technology, one would assume that the proposed Centre of Excellence would have heavy doses of Information Communication Technology; and, I hope  research in biological and chemical sciences, which is almost completely ignored in Sierra Leone today; research and utilitarian knowledge in mining and mineralogy; research and development on our infant tourism industry….. But, I hope we should not forget not only teaching ‘rote history and philosophy’, but,  guiding our youth especially in the deeper meanings of those two ‘Centre Subjects’ (according to the book by German Philosopher, E.F. Schumacher,  ‘Small is Beautiful’).  Sierra Leone needs to desperately study the ‘Mind of China’, their history and religion and philosophical underpinnings, so that we would understand what has spurred the speediest   race forward for the largest group of humanity ever in human history.

It would certainly be helpful if Sierra Leoneans learn, and, ‘fallamakata’ Chinese students  who attend classes five or six days a week –  from early morning (about 7a.m.) to early evening (4p.m.,  or, even later). On Saturdays, many schools hold required morning classes in science and math. (The failure in science and maths in Sierra Leone’s  educational system is massive and disgraceful!!) Many students also attend  (buxiban), or ‘cram school’, in the evening and on weekends in China. There is also a lot one-to-one tutoring after normal school hours. .

Aside from math and science, students take Chinese, English, history, literature, music, art and physical education. China’s teaching methodology differs from Western education methodology. Rote memorization and a focus on math and science are emphasized.  When Chinese  students get to ‘middle school’ (the equivalent of our BECE class) the preparation of  these students would  frightening – for they wake, sleep, and talk only their school exams; avoiding every other engagement. (Unlike  Sierra Leone,  where our students spend 90% of their time talking about European football, or sex).  Like it is with Asiatic nations like Singapore and Japan, students in China are obsessed with learning and making excellent grades.  We have to train our children to ‘fallamakata’ this part of Chinese life.

E-government must be speeded up in our country

I am glad that John Baimba Sesay asked the President pointedly about “building our human resource capacity”.  And, the President’s answer was exhilarating: “The Kingho Energy Group is committed to support Sierra Leoneans to come here (China) and be trained, especially those that will be interested in involving their outfits… The Chinese leadership has also indicated strong commitment to support the development of our human capacity with frequent in-house trainings of government officials and other officials to enhance their professionalism in what they are doing, and also learning from the Chinese experience”.  Bingo!!

Immediate mechanisms have to be set up by President Koroma to ensure that these ideas are followed up on, and, sustained.   In 2005, I attended  a briefing – attended by the crème de la crème of Sierra Leonean society – by the Chinese Hauwei Group on the introduction of  E-government in Sierra Leone. It was chaired by the  then information minister, Prof. Septimus Kaikai.  Of course, there is very little information that has been put in electronic form in nearly all the public space in Sierra Leone. There is very little ‘Knowledge Management’ in the public sphere in our country.  We learn little from past experiences, and  to access information from a file just five years old could take months!  Work that should take three minutes in government offices could incredibly take three months as people turn over old files and papers!!  There is almost no cross-fertilization of ideas, little inter-disciplinary approach to problem solving, at nearly all levels of government in our country because of the lack of electronic means of storage and retrieval of information.  Thus, too many Sierra Leoneans are too satisfied with being meek recipients of technology from anywhere out of the country, and, too shamelessly take it as normal that outsiders should do any intricate work that demands thought and ingenuity.   If there is one thing we have to learn from, and ‘fallamakata’, the Chinese on, it is….Self Pride!! Self Reliance.  Floating a vision by the leadership, and staying the course, no matter what….. is a forte of the Chinese which is now being lauded by even the Americans who used to vehemently denounce them some forty years ago.  This is something President Koroma can ‘fallamakata’ – i.e.:  being tough about ‘enforcing’ attitude change, not just preaching about it; enforcing the rules on Operation WID’…..

As China struggled to develop in the 1960s, there was a crescendo of criticism from the Western world.  Growing up in Sierra Leone in those days, we all brought Western propaganda on the Chinese – that they were brutal to each other, and, would violate every tenet of human right to suppress their own people; that they are the epitome of the word ‘brainwashing’; that they are so banal and lack fashion sense, they all wear shapeless dungarees all the time……  Though the Moa Zedong-inspired Great Leap Forward and Cultural Revolution were over-ambitious experiments to industrialize China and to weed the psyche of the people out of negative habits were monstrous experiments in governance, nonetheless, they were mistakes borne out of good intentions at mass mobilization for emancipative goals.  Those social and political experiments need NOT be replicated in Sierra Leone, but, the principle in them can be useful: rapidly transforming a nation cannot be done by the mild in spirit of the leadership.   No society in human history  has  made any rapid positive transformation without anguish and pain!! The era of the Industrial Revolution in Europe witnessed horrific scenarios of the majority of Europeans.    One problem we have in Sierra Leone is that we imagine that transforming our countries can be done by nearly  all workers sitting down in air-condition offices; that we can be  what  America or Europe or China are today through the intensity of our prayers in mosques and churches, or, how fervidly we argue in bars and ‘diamba potes’.  It would not be sufficient to learn from China their present position as another Big Power almost at the same level as Russia and the US – but, to learn  from China how they got there.   To ‘fallamakata’ China positively.

‘Positive Fallamakata-ering’ should be inculcated into especially youth

Ahead of Nelson Mandela Internatio...