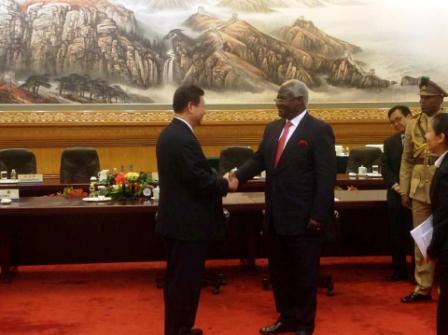 “Whenever I am with African friends, I feel particularly happy and at ease. During my trip to Africa in March this year I could feel the warmth of the African people everywhere I went. So I do hope that this time you come to China you can also find yourself at home as China is indeed your home away from home”, the Chinese leader assured.

President Xi Jinping also said that the African continent is full of vitality and promise. He noted that his impression was that Africa is just like a lion running at even faster pace as there is no limit to its development prospects, saying, “I was deeply struck by this point when I visited Africa at this time, and Sierra Leone is an example of success for the pursuit of peace and development among African countries. Sierra Leone, he said, is also a microcosm of the development of the broader African continent.

The Chinese leader further noted that over the past twelve years and since the end of civil war, Sierra Leone’s improvement of human development indicators is the second fastest in the world, adding that “last year the economy of Sierra Leone grew by up to 17.5% and in the next few years the economy is expected to retain a double digit growth.”This in itself”, he said, “is an amazing story of Sierra Leone’s own development. But at the same time it also reflects the trend of the history which represents the overall growth and progress of Africa as a whole. So we are really happy for you”.

President Xi went on to note that China and Africa were in a community of shared destinies under the evolving situation, and they can achieve big things within the framework of China-Africa cooperation. “China and Africa should remain forever trustworthy friends and sincere partners and we should work together to promote comprehensive and in-depth growth of this new type of strategic partnership between China and Africa and bring greater benefits to the people of our two sides”, he urged.

On behalf of ECOWAS and Mano River Union, President Dr Ernest Bai Koroma congratulated President Xi Jinping on his election as President of China early this year. He also lauded the efforts of China in the outstanding support provided in the areas of development, peace and security across the continent, including Sierra Leone.

The remaining part of the meeting was held behind close doors, outcome of which will be communicated in due course.