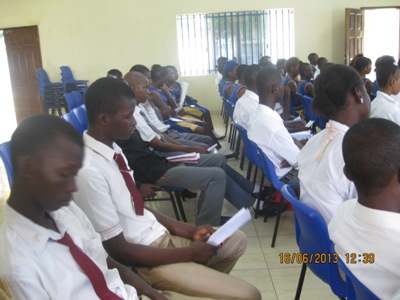 St. Joseph’s Convent Secondary School, Makeni emerged as winner of a symposium organized by the Northern Regional Office of the Anti-Corruption Commission (ACC) for Integrity Clubs in Makeni in observance of this year’s Day of the African Child -June 16th.  (Photo: Cross Section of members of the Integrity Clubs at the Symposioum)

In his welcome address, ACC’s Senior Public Education Officer, Al-Hassan Sesay on behalf of the Commissioner, expressed gratitude and appreciation to the Principals, Teacher Coordinators and pupils of the respective schools for their efforts towards the fight against corruption. He thanked the Teacher Coordinators for their relentless effort in maintaining the Integrity Clubs in their respective schools. Mr. Sesay said the objective of the symposium was to increase awareness on the negative impact of corruption and provide a forum of interaction for pupils and Teacher Coordinators of the different Integrity Clubs.

The Senior Public Education Officer reminded the pupils and Teacher Coordinators of their responsibility to join the fight against corruption and be role models. Mr. Sesay disclosed that the symposium was part of activities carried out by the Commission in observance of the Day of the African Child across the country. He encouraged members of the Integrity Clubs to not only spread anti-corruption messages in their schools but also resist, reject and stand firm against corruption.

School reps, contestants at the Symposium

Declaring the symposium open, the Regional Manager of ACC- North, Patrick Sandi underscored the importance of partnership in the fight against corruption in Sierra Leone. He said in order to take anti-corruption messages to secondary schools, the Commission established Integrity Clubs in twenty six secondary schools across the country. He disclosed that it had been a tradition of ACC to join other countries in the world to commemorate the Day of the African Child by raising awareness about the dangers of corruption and the benefits of a corrupt free country. “Today you are suffering from the vices of corruption. ACC expects you to stand up against it as your colleagues did against the Apartheid system in South Africa.”  Manager Sandi urged the pupils. He also appealed to them to inculcate good values for a better Sierra Leone as they shall be holding public offices in the not too distant future.

The Regional Manager assured members and their Teacher Coordinators of ACC’s commitment to promoting the Integrity Clubs and implored them to support the fight in the interest of the country.

Fatmata Kamara SHSS, a contestant making her point on the topic of discussion

Questions, comments and concerns from pupils and teachers formed part of the interactive event.