Acting Secretary General of the Sierra Leone Football Association (SLFA), Abdulraman Swarray has threatened to take the Cape Verde Football Association to the Disciplinary Committee of the World football governing body after the Sierra Leone delegation was delayed at the Nelson Mandela International Airport in Praia for over an hour on their arrival last Wednesday night.

The problem became worrisome when Officials of the Sierra Leone delegation were told by the Hotel Management on their arrival at the Santiago Hotel in the outskirts of the capital city that they will have to foot their bills for that day as the Cape Verde FA had not made any arrangement for the visitors. One of them says the host FA made arrangements for the visitors for only three nights (Thursday, Friday and Saturday).

“We are going to lodge an official complaint to the Ghanaian Match Commissioner for what could be described as ‘ill-treatment’ towards visiting delegation by the host. We informed them about our arrival and they deliberately refused to pick us up and give us lodging as required by the FIFA statute,” the SLFA Scribe says.

The 34-man Sierra Leone delegation (21 players and 13 officials) are in Praia for their penultimate fixture in the 2014 World cup qualifier scheduled for Saturday, June 15. The delay at the Airport was described by the SLFA Media Officer as a ploy to dampen team spirit in camp but assured that the incident will not distract them from their focus.

“We arrived at the airport at exactly 19:35 hrs. but there were no officials of the Cape Verde Football Association to receive us as protocols demand. This is very bad and against FIFA’s regulation on receiving visiting delegation. This is a deliberate game plan to frustrate us but we will not let that happen,” Sorie Ibrahim says.

However, after making several calls to the FA in Cape Verde to register their disappointment, a mini bus was sent to collect the squad and the person sent, who refused to identify himself says they were never informed by the Sierra Leone FA about their Wednesday scheduled arrival.

The delegation was forced to take dinner at a nearby restaurant after the Santiago Hotel authorities refused food to the delegation.

Meanwhile, SLFA officials are expected to lodge a protest to the Ghanaian Match Commissioner in Praia on Thursday morning.

CARL Calls for the Prosecution of... 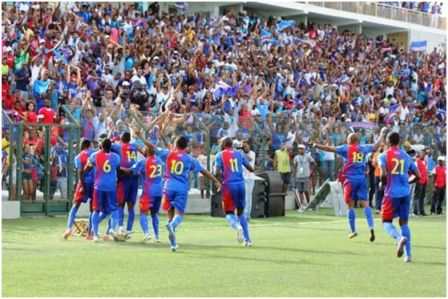