“We are here in Praia to compete”- Leones Stars Coach 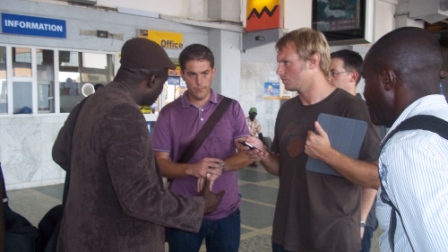 “We are here in Praia to compete”- Leones Stars Coach

Sierra Leone’s Head Coach, Jonathan Mckinstry says he is in Cape Verde for nothing less than all win noting that the Leone Stars are in Praia to compete for a place in the next rounds of the 2014 World Cup qualifiers and not just to honour the fixture.

“It is ridiculous when someone says we do not have a chance to qualify because Tunisia is ahead of us with five points and with two matches remaining. We just have to win our matches and hope that the Tunisia results go our way,” Coach Mckinstry said.

Sierra Leone has secured five points and trailing the Group B leaders, Tunisia on a similar margin, followed by Equatorial Guinea, who are a point behind Sierra Leone and next is Cape Verde with three points.

Coach McKinstry believes they can turn the table over in the remaining matches and when quizzed as to why his side failed to clinch all three points against Tunisia in Freetown last weekend, the 27-year old says football is an interesting game.

“We were on the advantage but a single mistake gave it all up but this is football, once you’ve crossed a bridge, you don’t look behind you. We have put that behind us, correct our mistakes and hope to secure all three points here in Praia,” he asserts.

John Trye, the United States of America (USA) based goalkeeper, who is expected to be between the sticks on Saturday, says they are in good mood and morale in the camp is high. The Goalkeeper was not surprised that he was called up after missing to be among the called ups for the Tunisia encounter in Freetown as according to him, Sierra Leone has moved from the point of having just one goalkeeper at a time to having numerous. He says all goalkeepers will not be given an opportunity at the same time and therefore when called up, one has to prove his mettle.

“As a player, I’m always ready to give my best when called upon and this match is no exception. I only hope we have a good game and the Tunisians fall to Equatorial Guinea. This is football, and as far as I’m concern, anything can happen,” he notes.

Despite having three of his key players missing for the Saturday World Cup qualifying encounter in Praia, Cape Verde, Coach Jonathan McKinstry is not a worried man and believes he has more options to fill the vacancies.

Sheriff Suma is suspended while both Kei Ansu Kamara and Ibrahim Tetteh Bangura are out injured though all three featured in the last match.

“I will miss these players very much because they are part of the team but I’m not worried because I’ve got other players, who can fit in the system as well,” the 27-year old says.

Mustapha Hadji is expected to start alongside Mohamed Poborsky Bangura on Saturday while Samuel Barlay, who reports have reveal has impressed Coach McKinstry will also be given the starting nod in midfield and John Trye will take the post.

However, the list of the first team is expected to be announced on Friday afternoon according to a member of the Technical Team and there is the likelihood that two or more players will be making their debut.

“We want to have the best players available on the pitch and if for any reason, few are unavailable, we will try others and this is because I’ve got 21 players to choose 11 and three from at any given match,” the Leone Stars Head Coach added.

Agriculture Ministry to Cough Up L...