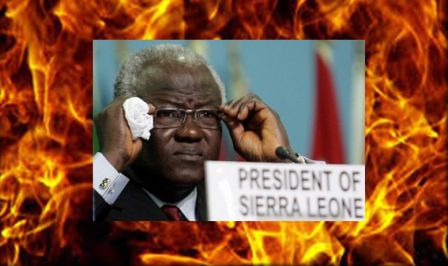 Latest report reaching this press states that disgruntled supporters of the All Peoples Congress (APC) Mile 91, Tonkolili District, past Friday, went on the rampage and burnt down the portrait of His Excellency President Ernest Bai Koroma in protest against the party’s failure to award a symbol to their preferred candidate, John Sallu Gbla who is reported to have consequently gone independent.

The ugly incident reportedly took place during the primary election for the award of symbol for the bye-election to be conducted in Constituency 62 slated for June 29 this year.

The thousands of supporters of Mr. Gbla are reported to have vowed to teach the APC an unforgettable lesson by voting overwhelmingly against Aaron Koroma who the party gave the symbol. The aggrieved supporters are reported to have clearly registered their avowed determination to vote en masse for John Gbla even though he is now contesting as an independent candidate.

The disappointed supporters reportedly showered praise on John Gbla for the several development projects he has brought to Constituency 62 and other areas in the Northern Province.

Meanwhile, John Gbla is said to have vehemently rejected the plea of the Minister of Information and Communication, Alpha Khan and the Minister of Labour and Social Security, Mathew Timbo, for him to step down for Aaron Koroma.