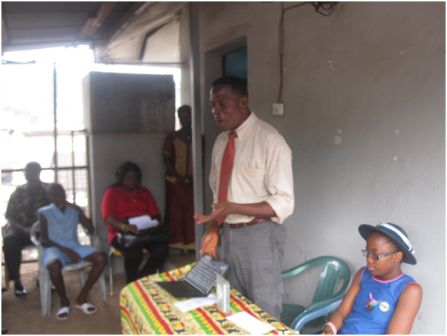 While launching the radio stationj, Mr. Koroma congratulated the parents, teachers, brothers, sisters and all others who, in diverse ways, supported the children to establish the radio station which he described as the first of its kind in our capital city. He expressed hope that the Community Teachers Association, the Ministries of Education, Science and Technology,  Social Welfare, Gender and Children’s Affairs, and Health and Sanitation, and other child-friendly organizations will make best use of KIDS Radio as a powerful communication tool for the educational and moral advancement of not only the children but also the general public.

“KIDS Radio is the beginning of a new generation of “my brother’s” and “my sister’s keepers. An era of identifying your abilities to foster peer group transfer of best practices in homes, schools and communities,” the founder told the children, urging them to use the magic words “please” and “thank you” which, he said, will help them succeed in life.

“An era of humbleness is always required if you desire knowledge that will secure your position in life,” Koroma advised the kids, reminding them that they have the challenge to show parents and custodians that they can be part of transforming their colleagues and that together they will be good citizens.

Giving a brief background of  KIDS Radio, the Head Producer, Rosetta O’Rielle-Campbell, said that it started broadcasting as a children’s program in 2003 and that in 2008, it applied to the Independent Media Commission and the National Telecommunications Commission for license. She informed that the radio is meant for giving children the chance to advocate for their rights and to express themselves on matters affecting them.