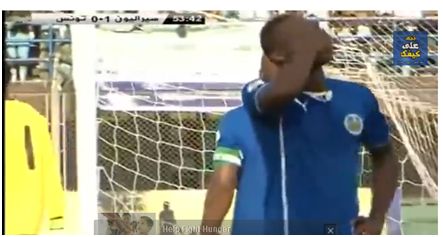 Sierra Leone has blown probably their only chance to get back into the 2014 FIFA World Cup Group B after carelessly conceding late to North African leaders Tunisia in Freetown.

The Tunisians equalised late to pick up a vital away point after Kei Kamara and Alhassan Kamara twice put Sierra Leone in front, but it was Ibrahim Tarawallie the Sierra Leone keeper whose error the Cartage Eagles capitalised on as they now lead by five points from four matches.

This result has left Sierra Leone languishing behind Tunisia again for the fourth time running in recent years.  Victory will have make history for the home side and also keep their hopes alive for Brazil 2014.

Sierra Leone has never beaten Tunisia in four previous attempts, and Sierra Leone was defeated in Tunisia 2-1 in the reverse fixture in March. They will travel to Cape Verde next in a desperate effort to restore all hopes of qualification. Their victory was against Cape Verde in Freetown in June 2012.

Willie Jay and Star Zero to be uni...