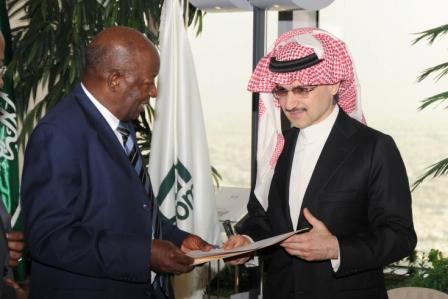 Agha says the Prince is scheduled to arrive in Sierra Leone on Monday, 10th June, 2013 for few hours visit. The Saudi Billionaire was recently invited by Sierra Leone’s President, H.E Dr. Ernest Bai Koroma as his personal guest – an invitation which the Prince has graciously accepted.

“We have heard and read about the development strides and good governance record of President Koroma and that are some of the reasons why it has pleased His Royal Highness to visit Sierra Leone,” a Spokesman in the Office of the Prince said on the phone yesterday.

President Koroma and HRH Prince Alwaleed are expected to discuss social and economic issues of mutual interest, and the bilateral relationship between their respective countries as well as the potential opportunities for HRH to develop and grow investments in Sierra Leone, particularly the hotel industry.

In a brief interview with a senior State House official last night, the Prince’s visit to Sierra Leone will afford the Government the opportunity to discuss the enormous potential Sierra Leone has for the inclusion in Kingdom Holding Company’s vast investment portfolio for Africa.

The Saudi Billionaire Prince is not new in Africa; he has invested substantially in the African continent in sectors such as tourism, infrastructure, real estate and telecommunications. Through his Kingdom Hotel Investments, the prince has constructed or acquired 5-star hotels in countries such as Ghana, Nigeria, Zambia, Tanzania, Kenya, among other African countries.

In 2005, Kingdom Holding Company and HSBC Holdings went into a joint venture to respond to growing investment opportunities in sub-Saharan Africa. Each party invested up to US$200 million in promising businesses in the region.

Shortly after going into the joint venture, Prince Alwaleed told reporters in Riyadh that: “Africa has enormous potential in multiple economic sectors and is a major priority for me. This joint venture with HSBC will act to build business and trade flows both regionally and globally by jointly using our skills, contacts, organisations and equity.”

The Prince is known for his precision for exploring new and potential business opportunities and ventures in synchronization with the direction and fluctuations of the economic climate which has earned him a global name in the world of business. Prince Alwaleed was recently described by the widely read Arabian Business Magazine as “the world’s richest Arab”.

According to the renowned Forbes Magazine, Prince Alwaleed bin Talal’s Kingdom Holding Company, of which he owns 95% and which trades on the Saudi stock exchange, owns stakes in hotel management companies; Four Seasons Hotels & Resorts, Movenpick Hotels & Resorts and Fairmont Raffles Holding, as well as hotel real estate such as the swanky Hotel George V in Paris and a stake in the Savoy Hotel in London.

Kingdom Holding, according to the Magazine, also owns billions of dollars of U.S. and international equities, including shares of Citigroup and News Corp. In 2012, the Prince and Kingdom Holding bought an estimated 3% stake in Twitter, a popular social networking site, via the secondary market for $300 million.

Prince Alwaleed graduated with a Bachelor of Science degree in Business Administration from Menlo College in California in 1979. He also holds a Master’s degree in Social Science with honours from Syracuse University, New York, in 1985.

“The Agenda for Prosperity is a Mu...