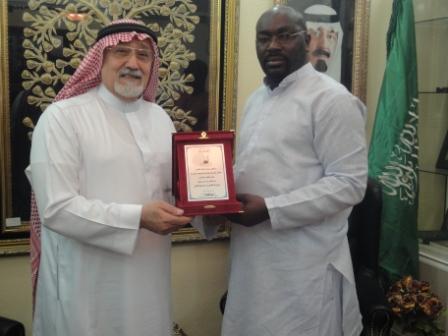 One of the dynamic and proactive Ministers in the APC Government is the Minister of Social Welfare, Gender and Children’s Affairs, Honourable Moijue  Kaikai.  (Photo: Moijue Kaikai receives award from Hajj authorities)

In his ministry, he is a workaholic, when you talk to the disabled, they would say, he is their best minister. For the women, the most gender sensitive and humble minister and to the children, they say he is unassuming, approachable and easy to deal with.

His performance in that Ministry for only six months has been very impressive at home and abroad. He was recently in the Kingdom of Saudi Arabia as head of a Hajj delegation to put modalities in place that would enhance preparations for this year’s would-be pilgrims from Sierra Leone.

At home, Hon. Kaikai is religiously pursuing the successful implementation of President Koroma’s “Agenda for Prosperity”, which amongst other things, gives preference to tackling social problems in the country.  For instance, the Social Welfare Ministry is one of the stakeholders of the National Advocacy for the Reduction of Teenage Pregnancy, which was launched by President Koroma a few weeks ago, to address the problem of teenage pregnancy, especially among school girls, in the country through advocacy.

One area where the Social Welfare Ministry has excelled since President Koroma assumed power is the Muslim Pilgrimage to Mecca, (Hajj). It could be recalled before the president assumed office in 2007; a good number of Sierra Leonean Muslims were deprived of the opportunity to make the religious pilgrimage to Mecca, here in Saudi Arabia. Some of those who were in charge were never committed to catering for the welfare of Sierra Leoneans who wanted to make the Hajj.

Flight and lodging arrangements for pilgrims were often an uphill task for those who were in charge. Many would-be pilgrims got stranded in neighbouring countries. For instance,  a good number of Sierra Leoneans who wanted to make the Hajj were left stranded in Guinea – Conakry and Abuja in Nigeria on several occasions because arrangements for flights fell through.

Unfortunately, some of them were provokingly called Alhaji Abuja or Haja Abuja. They had the money to fulfill one of the five pillars in Islam, but poor organization and other factors made them not to fulfill it.

But the emergence of the Koroma administration has sanitized preparations for the pilgrimage to Mecca. From 2007 to 2012, no Sierra Leonean Muslim has been deprived of the opportunity to fulfill that Holy dream of Hajj through lack of commitment by Government.

The APC Government has taken the bull by the horn by taking direct responsibility for making all necessary arrangements that will enable Sierra Leonean Pilgrims to leave the shores of the country, travel to Mecca, get comfortable accommodation, fulfill the Hajj and return home with consummate ease.

Despite a devout Christian, President Koroma has so prioritize the Hajj programme in Sierra Leone that the Muslim Community has a special place for him in their hearts. Muslims always applaud the President for his religious tolerance and love for humanity. To prove that the Hajj programme is highly on the APC Government’s agenda, preparations for this year’s Hajj has already begun in spite of the fact that we have a few months to go.

When they arrived, the dynamic Minister paid courtesy calls on several Saudi authorities, including the Saudi Pilgrimage Minister, Dr. Bandar bin Mohamed to make preparations in advance; so that Sierra Leonean Pilgrims would be assured of their ambitions to fulfill their Holy dreams of making it to Mecca. Hon. Kaikai’s clearly demonstrated Government’s commitment to addressing the social problems of its citizenry.

Apart from leading the Sierra Leone Hajj delegation to the Kingdom of Saudi Arabia, Kaikai took his time to pay courtesy calls on high-profile diplomats at the headquarters of the General Secretariat of the Organization of the Islamic Cooperation (OIC) in Jeddah.

He had audience with the Assistant Secretary General for Economic Affairs of the Organisation, Ambassador Hameed Opeloyeru and the Director of Political and African Affairs, Ambassador Lawal by engaging them on President Dr. Ernest Bai Koroma’s “Agenda for Prosperity” and how the organization would come in to make its implementation a success story.

Kaiakai’s diplomacy in showcasing Seirra Leone to these dignitaries in Saudi Arabia epitomizes the wonderful role he is yet to play in governance as a shrewd politician. His classical display of diplomacy and humility in having audience with these OIC big guns and several other senior officials in the Kingdom of Saudi Arabia has established him as a politician with a lot of potentials.

Born in Pujehun District in the Southern Region of Sierra Leone, Hon. Moijueh Kaikai is one of the young Ministers in the APC Government, whose performance in Government has impressed many Sierra Leoneans.

As Resident Minister South, Kaikai coordinated and supervised government projects in that region, especially infrastructure development, agricultural programmes, the free health care initiative and many others. His appointment as Social Welfare, Gender and Children’s Affairs Minister after the 2012 elections did not come as a surprise to Sierra Leoneans who were following his exemplary performance as Resident Minister.

He came to political limelight in 2005, when he broke away from the SLPP together with Charles Francis Margai and tens of thousands of former SLPP supporters to form the People’s Movement for Democratic Change (PMDC).

As a foundation member of the PMDC, the Minister was very instrumental in the formation of the political alliance between the then opposition APC and PMDC during the 2007 Presidential run-off which saw the defeat of the SLPP Government.

As a nationalist, Kaikai decided to continually work with President Koroma after the PMDC leader; Charles Francis Margai’s relationship with the President became frosty.

Consequently, Kaikai boldly resigned from the PMDC and officially declared for the ruling APC. And since his declaration, he has been very vigilant, honest and proactive in propagating the ideology of the APC party in his home district, which is predominantly SLPP.

Hon. Kaikai’s promise to the president is that, he’ll make his people in Pujehun to shrug aside sentiments and see reasons to support the ruling APC which is more development-oriented and forward looking than the SLPP they so cherish. His promise to President Koroma has accelerated his partisan activities in Pujehun. According to some Pujehun indigenes, the Minister’s unrelenting effort to spread the good message of APC in his home district is paying off.

Kaikai’s exemplary performance in the APC Government did not come as a dint of luck; it’s his good rapport with Sierra Leoneans particularly in the Southern Region, coupled with his social and overseas experience he has combined to produce an excellent result in his last performance contract as Resident Minister.

With time, only the sky will be his limit in his drive to help President Koroma achieve great things before he leaves office in 2017.