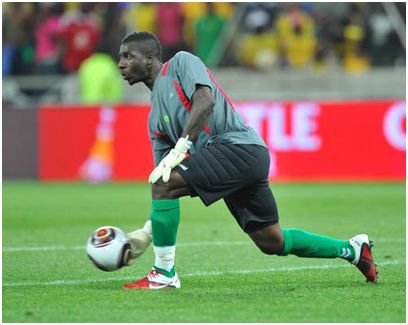 Sierra Leone USA-based goal keeper, Christian Caulker, (in photo) has make public to Sierra Express Media Sport UK that he will not be making the Sierra Leone versus Tunisia encounter for the race to Brazil 2014 despite reports of his availability.

According to the former Vasteras keeper, his passport will not allow him to meet the travelling criterion.  This news will be a gigantic loss for the new Leone Stars Irish manager McKinstry.  It is perhaps a hole in Leone Stars squad preparation considering he has been a regular stopper and has contributed enormously in the Leone Stars campaign in the recent years.

Caulker 24, widely experienced, started his professional career with FC Kallon and since then Caulker has been the number one goalkeeper for Leone Stars, making his international debut against Guinea Bissau on October 15, 2007.

He was the outstanding choice throughout the 2012 African Nation qualifier, with Niger, South Africa and Sierra Leone all level on 9 points and has been very much instrumental in all six games for Sierra Leone at the first round group stage of the 2010 World Cup qualifier.

Caulker is highly regarded as the best Sierra Leonean goalkeeper at this time. Caulker was the first-choice goalkeeper for the Sierra Leone U-17 side that participated at the 2005 UEFA-CAF Meridian Cup in Turkey.