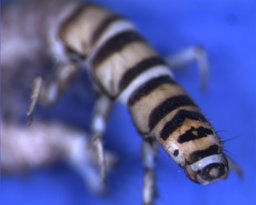 ABIDJAN 4 June – Guinea marine scientists began their second week of practical training Tuesday in the separation, identification and sampling of organisms that live on, in or near the bottom of the seabed.

The two-week course which began Tuesday in Conakry, the capital, includes theory on invertebrate marine organisms on the ocean floor, scientifically known as the Benthos Zone. Organisms in this include starfish, oysters, clams, sea cumbers, brittle stars and anemone which scavenge the seabed.

Data on Benthos has been collected by the Research Vessel Dr. Fridtjof Nansen in ecosystem surveys for the Canary Current Large Marine Ecosystem, organized in cooperation with the EAF Nansen-Food and Agricultural Organization project. This project supports young and middle-level fisheries scientists and managers to work with experienced colleagues to develop their skills.

The training of the Guineans is part of a wider effort to provide the same capacity to young scientists from Cape Verde, Gambia, Guinea-Bissau, Mauritania, Morocco and Senegal.  The aim is to build a body of scientists in west and northwest Africa to protect the Canary Current LME from resource depletion and habitat damage. The seas, coastlines and inland waters of these countries form this Large Marine Ecosystem, which the Canary Current LME project says is ranked the world’s third most productive fishing area with annual production of between two million and three million tons.

Sustainable management of this, and other, Large Marine Ecosystems is vital in meeting the Millennium Development Goals 1 and 7 to eliminate, by 2015, extreme poverty and hunger, and to ensure environmental sustainability. One of the targets for Goal 7 aims to reduce biodiversity loss, significantly. Another is to ensure that fish stocks remain within safe biological limits. Therefore, the training of Benthos specialists of the Canary Current LME will help in achieving these aims.

The Guinea training at that country’s Conakry-Rogbane Centre for Scientific Research (or CERESCOR) is being carried out by instructors from the Spanish Oceanographic Institute and the University of Vigo, in Spain. The Spanish institutions are undertaking this under an initiative called the ECOAFRIC project. They aim to boost the number of local scientists in the Canary Current LME region specializing in marine benthos.

The cooperation agreement between the countries of the LME and the two Spanish institutes comprises a variety of activities. There is the practical aspect, specific courses lasting two months at the University of Vigo, help locally with taxonomic study of samples, as well monitoring doctoral theses in the institutes of the region.

The Canary Current LME is a project funded by the Global Environment Facility and executed by the Food and Agricultural Organization of the United Nations, and the United Nations Environment Programme through the Secretariat of the Abidjan Convention for component three on water, quality, habitat and biodiversity.