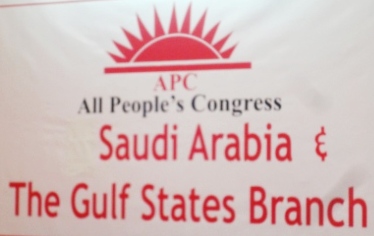 At a well-attended and a colourful ceremony, Chairman Kanu thanked his compatriots, for the trust and confidence, which they demonstrated through the power of their vote. He assured them, that he will do his utmost at all times, to continue to deserve their trust.

Kanu was elected a couple of weeks ago in an election held at the Wadi Laban District, in the outskirts of Riyadh.

He also thanked his supporters for the mandate given to him and his executive on that day to take over the affairs of the branch for the next two years.

In his inaugural address, he hailed President Koroma for what he described as “landmark achievements of the APC” since it came to power in 2007. He says the country’s Chief Executive has made Sierra Leoneans proud all over the world for the achievements made under his leadership in the areas of Energy, Infrastructure, Health, Education, Agriculture, Mining, among many others.

Dr. Sorie Gassama left of King Saud University administering the oath of office to the new APC leader in Saudi

Other speakers included, Sierra Leone’s Ambassador to the Kingdom of Saudi Arabia, H.E Wusu B. Munu, the outgoing Chairman of the party, Sorie Ibrahim Kanu. The oath of office was administered to the Chairman by Dr. Sorie Gassama of the King Saud University and the occasion was chaired by Ibrahim Yousuf Sillah of the same university.

He said the government of President Koroma has shown remarkable interest in the common man and woman’s welfare by running the country as a business entity. That explains, he added, that it is a government that is not only about intentions, but about actions.

When President Koroma assumed power in 2007, Chairman Kanu observed, the President inherited an economy that was not only shattered, but stagnated, and in five years, Kanu said, the President turned it around and made it productive and sustainable.

Some of the APC members in Saudi Arabia

He called on all Sierra Leoneans to put aside politics and commend President Koroma for “such outstanding contribution and impressive record of achievements” in making a difference to the lives of Sierra Leoneans.

“Under my leadership; and with the help of the fine men and women who constitute my administration, I will make sure we utilize the potentials of every member of the APC Saudi Arabia branch to the fullest,” he promised in the interview.

Below is the full speech of the Chairman…

We gather here this evening to inaugurate a new Chairman of the All People’s Congress, (APC), Saudi Arabia and the Gulf States Branch. As the Almighty Allah has destined, I have today Thursday, the 30th of June, 2013, successfully attained that position of Chairmanship for the next two years. I thank you Comrades for your trust and confidence in me. I pray that the Almighty Allah grant me and my cabinet the prolonged lifespan, the leadership wisdom, and the vigorous energy necessary to steward this great party to unprecedented heights, and subsequently contribute immensely in the massive political and socio-economic advancements currently being witnessed across our beloved nation.

I have decided to reserve a large portion of my inauguration speech to spotlight the inspirational factors that influenced my unfettered and unquestionable pledge to the membership of the APC party. Since my childhood days, the APC party has played a pivotal role in shaping and nurturing my adolescent perceptions in politics and all that goes with it in the name of landmark achievements. In fact, it was through the late Siaka Probyn Stevens, who, on the 4th of October of every year during my school days, would come in person, to address us at the Albert Academy on our annual Speech Day and Prize Giving.

Those days were like an eye-opener that pricked our innocent minds with curiosity towards politics. Not long after, we began to see the reconstruction of broken bridges like the Murray Town Bride, the world-class Congo Cross, the Siaka Stevens Stadium, The Wahamann Abu Road construction that change the entire landscape of the country. Indeed, those days highlighted record number of scholarships for further studies abroad which produced a new generation of intellectuals in the likes of Dr. Abdulai Conteh, and many more. Suffice to say, there was a notable influx of seasoned technocrats during that era.

Ladies and Gentlemen, it is an indisputable fact, etched on the often ignored records of our national history that the APC Party has always been the foundation stone for meaningful developments in Sierra Leone. After more than a decade of rebel war, the former Head of State, Dr. Ahmed Tejan Kabbah negotiated tirelessly to attain sustainable peace and return the country to a semblance of normalcy, but even after the hard-earned peace, our beleaguered nation was still struggling with the notion of re-establishing its sense of focus and direction. The devastating destruction and psychological trauma bequeathed by the rebel war left the country in dire need of a government with visionary leadership to help it rediscover its sense of stewardship towards real development. Thanks to the Almighty, our prayers were answered when, in 2007, the APC party mounted a comeback campaign strategy that saw the party recapture the leadership and produce, yet again, a leader that has won the admiration of the world and brought a new dimension to the status quo of the Presidency in the region!

When President Dr. Ernest Bai Koroma took the reins of leadership, he declaratively promised to rule the country like a business entity, underscored with accountability benchmarks and performance-based records. With mesmerising intelligence, even the previously rewarded party loyalists lost key cabinet positions when there was a reshuffle because their ‘report card’ demanded a change of position. As a result, within a short period of time after taking office, it was clear that Sierra Leone was witnessing an overwhelming change in fortunes for the better. President Koroma was to follow it up with practical steps when he embarked on a declarative tour of many countries in Africa. His impressive human rights record, larger-than-life attributes saw him make a lasting impression on world leaders, who had no choice but to take him seriously.

It wasn’t long for our continent to demonstrate their recognition of his leadership maturity when he was appointed to join a group of other leaders in a peace-brokering mission to Cote D’Ivoire. Fast forward to this year 2013, we still saw this great man being invited to the White House by President Barack Obama and thus put an icing on the cake in terms of acknowledging him as a successful democratic leader in his own right. No doubt, where such a consistency of leadership style thrives, you come to admit that whatever laurels are granted, they surely come out of merit.

Distinguished Guests, Ladies and Gentlemen, let’s leave it to the historians to make a catalogued narrative of all the achievements notched by Presidents Koroma in his first term. A snapshot summary of the 2012 elections will go down as a testimonial of his good work with a resounding victory in the poles. Switching the focus to the present, it is quite evident that the ‘World Best’ is out to make more records to back up the newly constructed road networks and the history made by the Bumbuna completion. University of Makeni is one of the newest education institutions in the country. The Ministry of Foreign Affairs is now enjoying a brand new $10m structure fully equipped with state-of-the-art equipment and furniture.

A new Medical Center for Allied Medical Science has just been construction at Grafton. There’s now a massive, government-constructed supermarket in Kenema.  Solar-operated street nights have recently been showering major provincial towns like Bo, Kenema, Kailahun, Pujehun, Lunsar and Makeni, all with the glittering effects of a progressive nation. Just last week, The International Monetary Fund, (IMF) issued a report featuring an impressive Economic Growth Acceleration of 15.2 % through 2012, followed by an expansion of agricultural services and construction, and a GDP projection of 13% for 2013.

Fellow citizens, all these examples are significant pointers to one fact, and that is, Sierra Leone is currently experiencing an unprecedented period of national development which deserves Diaspora participation. We in this part of the world need to make our voice heard in Sierra Leone’s corridors of power. We cannot afford to remain passively sidelined in the shadows as President Koroma’s Agenda for Prosperity continues to pick up momentum. With a proactive executive, we can come out strong and determined to impact positively in our national political landscape.

There are many ways to do that, and among my foremost priorities is to infuse that political awareness to always update members with political and socio-economic developments in our country. In Sha’Allah, I plan to work hand-in-hand with our Ambassador and his staff to explore potential avenues that will effectively strengthen this branch’s activities with our comrades throughout the world. By gaining access to every e-mail address of cabinet ministers, responsible authorities and the party secretariat, we plan to register our regular contributions every step of our country’s governance.

From our side of the globe, there’s a lot we can benefit from our host country, Saudi Arabia, with respect to the remarkable mechanisms put in place to adequately address the socio-economic welfare of its citizens. We can always carry a message of hope to the exasperated citizenry of Sierra Leone if we can copy the structural planning of this blessed Kingdom in terms of infrastructure, the availability of well-equipped clinics, hospitals, fire stations, community centers, schools, and many other worthwhile amenities.

Sierra Leone is yet to be fully recognized as a heavy-weight oil-producing country but the prospects are significantly encouraging.

We can advise our government to plan ahead by compiling a long list of national development projects from now onwards, so that, when the full economic dividends of mining and oil production earnestly begin to flourish, these projects can be readily financed, and vigorously supervised. It is a fact of economic life that, funds left idle, will always be targeted for embezzlement, and economic realities these days in every part of the world tend to temp everybody’s honesty.

In collaboration with our Sierra Leone Embassy, we also wish to strengthen bilateral relations with the Kingdom of Saudi Arabia and other Gulf States by lobbying for investments opportunities, exchange of state visits by Cabinet Ministers and other responsible authorities of our two countries, the building of our permanent Embassy Chancery in the Diplomatic Quarters, and even seek for employment opportunities and scholarships. By and large, the list is endless because, as time goes on, we come to discover more interesting areas that deserve attendant initiatives.

And, as I prepare to introduce my executive, I wish to take this opportunity to inform my fellow citizens that the party membership is open to all, regardless of regional or tribal affiliations. The foundational ideals of the APC party cuts across tribal and regional lines. We all need to put hands together, seize the moment of the day, and help President Koroma’s Agenda for Prosperity succeed, for us and for our future generation. Long live Sierra Leone. Long live the All Peoples’ Congress (APC)! 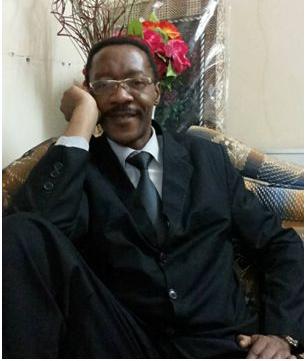