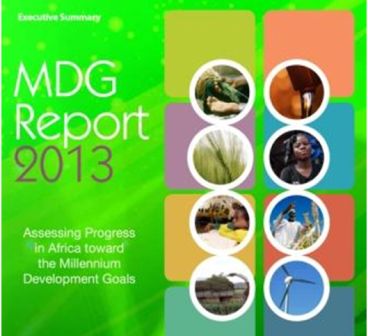 Addis Ababa, 27 May 2013 – Converting Africa’s impressive economic performance over the past decade into greater gains on the Millennium Development Goals (MDGs) remains a primary challenge for Africa, according to a new report.

Released today, The MDG Report 2013: Assessing progress in Africa toward the Millennium Development Goals concludes that while Africa is the world’s second fastest growing region, its rate of poverty reduction is insufficient to reach the target of halving extreme poverty by 2015.

An analysis of food insecurity – the report’s theme – provides insights into how this phenomenon impacts other MDGs, particularly health-related goals, and how concerted efforts to improve agriculture, food distribution and nutrition would fast-track progress towards other MDGs.

With fewer than 1,000 days until the 2015 target for the MDGs, the report takes stock of Africa’s overall performance on the MDGs and identifies the best performing countries by indicator, based on progress relative to each country’s initial conditions.

Globally in 2012, 15 of the 20 countries which made the greatest progress on the MDGs were from Africa. Countries such as Benin, Egypt, Ethiopia, Gambia, Malawi and Rwanda are making impressive progress on a number of goals and targets.

The report concludes it is imperative that countries continue to learn from one another, as the countries that have sustained, equitable growth, with political stability and human development-oriented policies, are doing well in most of the goals.

It assesses four goals as “on track” and four as “off track”:

Importantly, the report argues that Africa must put structures in place to sustain its development well beyond the MDG timeline.

“We hope that this report inspires and energizes member states to accelerate efforts towards the MDGs. Further, we recommend that the post-2015 development agenda consider the initial conditions of nation-states and recognize countries’ efforts towards the goals, as opposed to just measuring how far they fall short,” states the report’s foreword, co-signed by the AUC Chairperson Nkosazana Dlamini Zuma; UNECA Executive Secretary Carlos Lopes; AfDB President, Donald Kaberuka; and UNDP Administrator, Helen Clark.

This year’s progress report covers a gamut of issues and policy recommendations, and reveals a mixed pattern of successes, challenges, innovations and obstacles.