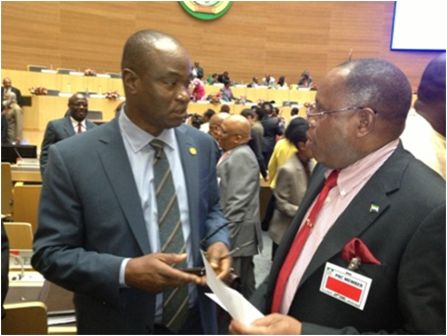 Hon. Dr. Samura Mathew Wilson Kamara, Minister of Foreign Affairs and International Cooperation who arrived in the political capital of Africa, Addis Ababa via Brussels is attending the 23rd Ordinary Session of the Executive Council meeting which is underway in Ethiopia.

The Executive Council is composed of Foreign Ministers of Member States charged with the responsibility of coordinating and making policy recommendations in areas of common interest to the Member States. It is answerable to the Assembly of Heads of State and is tasked with preparing Sessions for the Assembly.

The Ministers of Foreign Affairs today commenced discussions on Part B of the document which includes items on which agreement has not been reached by the Permanent Representatives’’ Committee (PRC) and therefore require debate by the Foreign Ministers.

Her Excellency Dr. Nkosazana Dlamini-Zuma, Chairperson of the African Union Commission in her opening statement said that the eyes of the world were focused on the Continent.

She said the jubilee celebration is a yearlong event.

The Foreign Minister of the Federal Democratic Republic of Ethiopia and Chairman of the Executive Council, Hon. Dr. Tedros Adhanom who declared the meeting open said the OUA/AU Anniversary is the time to celebrate the achievements of the Continent for the past 50 years with the clear vision to honour our heroes and heroines.

The duo exchanged views on the Joint Commission signed by the two countries relating to bilateral co-operations and on the issue of the Sahrawi Arab Democratic Republic.

Mr. Othmani expressed his country’s intention to rejoin the African Union again after over 20 years’ absence.

He said his country stood ready to support Sierra Leone in the areas of agriculture, providing short courses for young Sierra Leonean staffers in the Foreign Service and the provision of 15 scholarships to deserving students to study in Rabat.

Minister Samura Kamara notified his colleague about the multi disciplinary delegation from Sierra Leone that will soon visit Morocco.

Ambassador Dr. Sabri requested Minister Samura Kamara to arrange bilateral meeting on the margins of the AU Summit with a targeted number of countries to help mobilize support for Dubai’s bid to host the 2020 event.