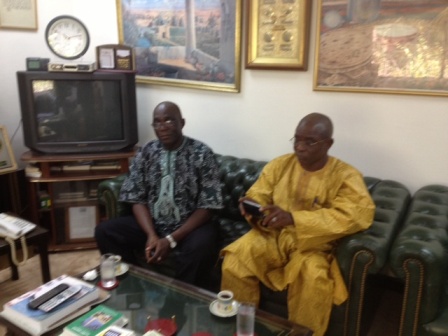 The news was received this week by Sierra Leone’s Ambassador to the Kingdom of Saudi Arabia, Wusu B. Munu and his nationals with shock.

In his condolence message delivered to the bereaved family in Jeddah on behalf of the Ambassador yesterday, the Head of Chancery, Umaru S. Dura said : “During his life time, he was very supportive to the course of humanity more particularly to the Sierra Leonean Muslim Ummah who join other Muslims world wide to perform the annual pilgrimage in Mecca”.

The Ambassador extends on his personal behalf, the Embassy and Sierra Leoneans in the Kingdom of Saudi Arabia to the bereaved family deepest condolences and heartfelt sympathy for the irreparable loss.

“Our thoughts and prayers are with the family during this difficult time of mourning. The late man was a wise statesman who dedicated his life to serve his religion, people, country and humanity. He was a true friend of Sierra Leone,” the Head of Chancery said to the family on behalf of the Ambassador.

Sheik Al Fadl was officially appointed Honorary Consul for Sierra Leone by the late President Dr. Siaka P. Stevens on 9th December, 1972 – about six years before the establishment of the Sierra Leone Embassy in the Kingdom of Saudi Arabia.  In the course of his 41 years of dedicated and outstanding service to Sierra Leone, the late man took every opportunity to promote Sierra Leone- Saudi relations. He was 85

I am in politics to serve says Hon...