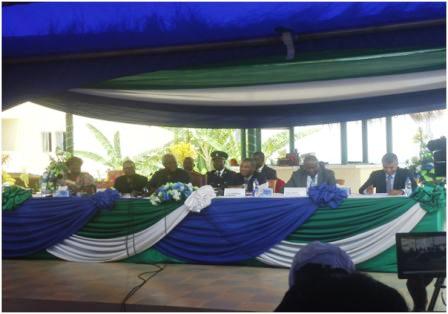 President Ernest Bai Koroma has said that he wants the agriculture sector to improve its contribution to the overall goal of national economic growth, wealth creation, food security and poverty alleviation in line with the Agenda for Prosperity.

Delivering his keynote address at the opening of the West Africa Agricultural Programme (WAAPP), at the Bintumani Hotel, Aberdeen, on Monday, April 22 this year, he noted that the implementation of WAAPP activities have greatly impacted on the agricultural sector as it is a source of livelihood for majority of the people of the sub-region.

He also paid tribute to the regional ECOWAS community which he said has advanced policies to guide and coordinate the implementation as well as monitor the gains of CORAF/WECARD, of which Sierra Leone is part.

In his statement, the CORAF/WECARD Executive Director, Mr. Harold Macauley, thanked the Government for the wonderful hospitality that has been accorded them.

He explained that by 2015 it is estimated that population of the sub-region will double, which will mean more production of food.

In his statement, the World Bank Representive in Sierra Leone, Mr. Christopher Gabelle, observed that the presence of President Ernest Bai Koroma at the meeting shows that agriculture remains an important aspect in the country.

“Agriculture is a critical sector to the livelihood of the sub-region and therefore the World Bank commends the bringing together of countries to share their challenges and experiences in agricultural productivity,” he stressed.

He noted that the World Bank has been funding the project since 2000 to promote agriculture and has reaffirmed its continued support to promote the project.

The meeting was chaired by Deputy Minister of Agriculture, Mrs. Marie Jalloh.

The West Africa Agricultural Productivity Programme (WAAPP) is a ten year programme consisting of series of Adaptive Programmatic Loans (APL) funded by the World Bank, under the auspices of ECOWAS.

This programme aims at rendering agriculture more productive and sustainable while promoting regional integration. Specifically, it provides a sub-regional framework on the basis of which the ECOWAS countries will collaborate to implement national and regional agricultural strategies related to the generation and dissemination of technologies of priority speculations specific to the countries.

The main objective of WAAPP is to contribute to the growth of sustainable sub-regional agricultural productivity of key priority speculations of participating countries that are also regional priorities.