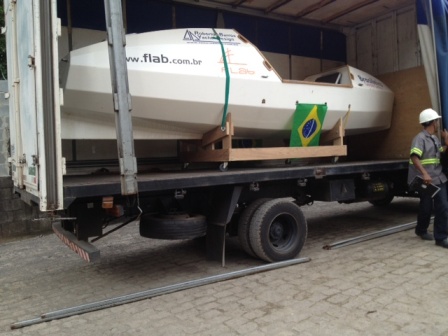 BROOKLYN, NEW YORK – In20minutes.org is a global campaign designed to encourage HIV testing. The campaign begins on World AIDS DAY 2013 and will be promoted during the Goree Challenge IV – Spirit of Malabo project.  (Photo: Spirit of Malabo begins journey to New York)

H.E., President Obiang Nguema Mbasogo is being lauded for his support of humanity, sports and its impact on the country’s Horizon 2020 Development Plan. The Head of State will receive a Brooklyn Dodgers Authentic 1955 Jackie Robinson Home Jersey by Mitchell & Ness during his visit this week in New York and grass/ soil from the grounds of Ebbets Field, the former home of the Brooklyn Dodgers.

Major League Baseball celebrated the 66th anniversary of Jackie Robinson breaking the color barrier as a member of the Brooklyn Dodgers last week.  Robinson broke into the major leagues on April 15, 1947. He earned Rookie of the Year honors in 1947 and National League MVP honors in 1949, and also led the Dodgers to the World Series six times in his career. He was inducted into the Baseball Hall of Fame in 1962.

Another African-American will soon share another lesson on perseverance. Unlike Roberson, who had deal with the rampage of deep-segregation in the south, pitchers throwing at his head, base runners trying to cut him with their cleats and verbal abuse from opposing teams, Victor Mooney of Queens will row across the Atlantic Ocean with only the sea as his friend or foe. This will be the rowers fourth bid. Still, it will be a first for an African-American.

Brooklyn Dodgers general manager, Branch Rickey like what he saw in Robinson and open the door for him.  “For me, President Obiang is my Branch Rickey”, said Victor Mooney during a training break at the New York Sports Club. “With the recent medical breakthroughs, people can get tested in twenty minutes. We hope in our case, to row that message home, albeit some 5,000 miles from the Canary Islands to New York’s Brooklyn Bridge”, Mooney added.

Today, an estimated 34 million people worldwide live with HIV/AIDS, with more than two-thirds living in developing countries. Nearly three-fourths of the 2.5 million new HIV infections in 2011 occurred in these countries. More than 1.1 million people in the U.S. are infected with HIV and hundreds of thousands don’t know it. Mooney has lost one brother to AIDS and has another battling the disease.

The Spirit of Malabo was designed by Roberto Barros and built by Flab – Construção Artesanal de Embarcações. The transportation of the vessel to New York is being coordinated by DSV Air & Sea Logistica Ltda. and MSC – MEDiterranean LOGistica Ltda.

Goree Challenge IV – Spirit of Malabo is a project of the New York City based South African Arts International (SAAI). SAAI has received a generous donation from the Republic of Equatorial Guinea and unprecedented amount of in-kind and moral support from over seventy corporations, an array of governments and global health institutions.

The Republic of Equatorial Guinea (República de Guinea Ecuatorial) is the only Spanish-speaking country in Africa, and one of the smallest nations on the continent. In the late-1990s, American companies helped discover the country’s oil and natural gas resources, which only within the last five years began contributing to the global energy supply. H.E., President Obiang Nguema Mbasogo has championed the fight against AIDS through preventive education, condom distribution and financing of antiretroviral medicine for afflicted populations. The Head of State also called for a shared responsibility in fighting the disease.