Manzu to Launch ‘Ability In Disability’ in Sierra Leone 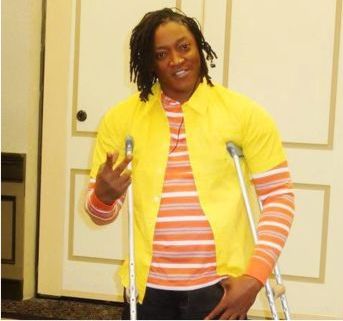 Manzu to Launch ‘Ability In Disability’ in Sierra Leone

Mohamed Jimmy Rogers, aka Manzu, will launch his solo album, ‘Ability in Disability’, later this year.  Manzu who was a member of the group C-Bolt, confirmed that works are ongoing for his ‘Ability In Disability,’ album.

Speaking to SaloneJamboree in an exclusive interview, Manzu confirmed that he had gone solo.  The ‘Titi Ole Mi’ star said despite the breakaway he still enjoys a good relationship with C-Bolt, a group based in Sierra Leone.

Manzu, who is based in the United States, is now married to a beautiful and loving wife and nursing a family in Maryland.

He said despite being a disabled, he has worked very hard to take care of himself and never relied on anyone for help. He said he holds the belief that he does not need sympathy as a disabled person and therefore called on other disables to believe in themselves and work hard.

He added that he decided to title his upcoming album ‘Ability in Disability’ to tell the world that one can make it despite been a disable. He cited the current Deputy Minister of Social Welfare, Gender and Children’s Affairs as a success story for the disabled.

Manzu said he is very proud of M.B Atilla’s achievement.

He said he will soon introduce his latest single which he titled: ‘Rokoto’. He described it as a dance form which Sierra Leoneans should accept instead of ‘Azonto’ from Ghana.

He said Sierra Leoneans should be proud of their music, culture and also innovate their own dance.

Manzu said ‘Rokoto’ will be out in few weeks time and that the album will follow later in the year.

He thanked his fans for their support and encourages them to exercise patience as ‘Ability In Disability’ will make up for lost time!