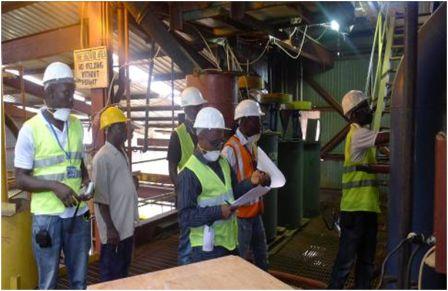 In fulfillment of its mandate to protect people and the environment from the harmful effects of radiation, a team of regulators from the Nuclear Safety and Radiation Protection Authority (NSPRA) conducted inspections at the Sierra Rutile Limited (SRL) Wet and Dry Plants and its Floating Dredge and also conducted Source Search around the vicinity of the mines at Mokanji for orphan radiation sources which may have been abandoned during the 10 years civil conflict with the aim of removing any of the sources and bring them under regulatory control.  (Photo: Regulators at Dry Plant at Sierra Rutile Limited)

In giving the entrance briefing, Manager and Head of Regulatory Control of the Authority, Mr. Umaru Bun-Tejan raised concern over the failure of the mining company to have their nuclear gauges authorized by the authority after bringing them into the country. He observed that the gauges have not been registered in the inventory of sources and therefore out of regulatory control. He warned that the unlicenced sources were a nuclear safety and security risk to the people and the environment.

He advised that Sierra Rutile Limited take advantage of these training opportunities for their workers to be trained so as to enhance protection of the workers and the environment against over-exposure to radiation which may cause cancer.

At the Dry Plant Site the team discovered that a number of gauges are not in the inventory and the TLD (Thermoluminiscent Dosimeters) were not at their locations for environmental monitoring of radiation. This he said also constituted a nuclear safety and radiation protection risk.

At the Wet Plant and the Dredge, the team discovered that the workers working around the vicinity of the gauges were being unduly exposed as they were not monitored for radiation. The team observed that this constituted a serious regulatory breach which needed to be urgently addressed. They urged that immediate action be taken to address the situation otherwise, enforcement actions would be instituted against the company in accordance with the provisions of the Nuclear Safety and Radiation Protection Act, 2012.

Responding, the Manager, Environmental Health and Safety Sierra Rutile Limited, Mr. Ansumana Jabati acknowledged with thanks the observation and findings of the inspection team and commended their proactiveness. He assured the team of the fullest cooperation of Sierra Rutile Limited to ensure that people and environment are protected. 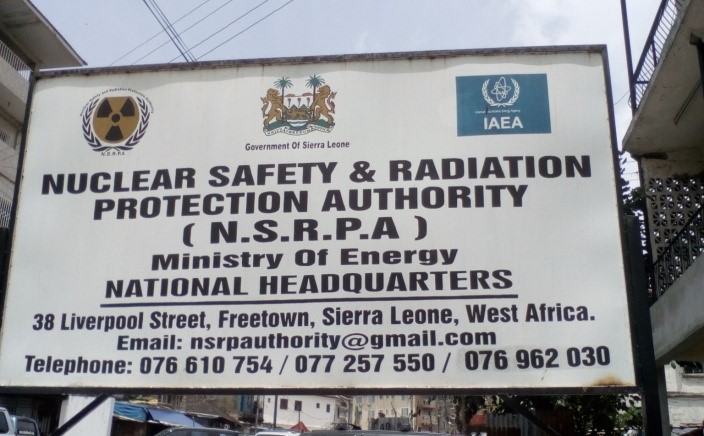