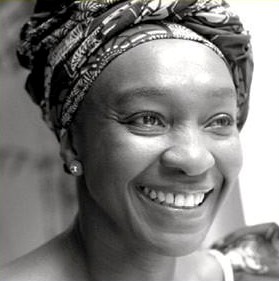 Despite twenty years of successive presentations of African Film Festival (AFF) to audiences in New York and around the United States of America, Sierra Leonean born AFF founder and executive director is still humbled and repudiates any embellishment of her accomplishments.  (Photo:Mahen Bonneti – Sierra Leonean born founder and executive director of African Film Festival)

“Mahen Bonetti should be commended for her two decades of working behind the scenes to bring the best in African film to American audiences and audiences around the world,” said Cheryl Duncan of Cheryl Duncan & Company and public relations consultant to AFF.  “She is a true champion of the African filmmaker and I applaud her for her diligent service to African cinema,” adds Duncan.

The 20th anniversary festival commemoration kicks off Wednesday, April 3 and continues through April 9 in two screening venues – Walter Reade Theater and Elinor Bunin Munroe Film Center respectively – at the Film Society of Lincoln Center in Manhattan, New York.  An Opening Night reception will be held at the Walter Reade Theater with LOOKING BACK, LOOKING FORWARD: 20 YEARS OF THE NEW YORK AFRICAN FILM FESTIVAL as the central topic of discourse.

The late Senegalese filmmaker and writer Ousmane Sembene widely considered as the father of African cinema who died on June 9, 2007 and whose films were among the initial screenings when AFF started will be honored including an Opening Night launch of his rarely-screened Guelwaar.

Haitian born, Hollywood actor Jimmy Jean-Louis known for his roles in NBC television series Heroes as well as in Derailed and Monster-in-Law will also behonored at the festival for his starring role in Toussaint Louverture, a historical film about the slave revolts that led to Haiti’s independence from the French.

The Festival will highlight the U.S. Premiere of Dolce Vita Africana, about legendary Malian photographer Malick Sidibe, Death for Sale, Burn it up Djassa and Nairobi Half Life from emerging African directors.  In addition, the festival will feature some of Africa’s burning social issues with two controversial films including Land Rush an expose on the dramatic increase of foreign investors buying huge parcels of African land and Fueling Poverty a joint project between Nigerian filmmaker, producer Ishaya Baku and the Open Society Initiative of West Africa (OSIWA).  Fueling Poverty is a documentary depicting corruption and the mismanagement of Nigeria oil wealth made against the backdrop of a massive protest in early 2012 when Nigerian government removed fuel subsidy.

AFF’s goal of boosting Women’s presence in African cinema is evident with the presentation of veteran filmmaker Licínio Azevedo’s Virgin Margarida which organizers say is a timeless tale of female solidarity and struggle. There is also Patricia Benoit’s Stones in the Sun which deals with the traumas of memory of a group of Haitian refugees living in the US, while Chinonye Chukwu’s autobiographical debut Alaskaland deals with the conflicts of a young Alaska-raised Nigerian struggling to come to terms with his cultural heritage.

According to Mahen – as she is affectionately called by her friends and colleagues – the main purpose of creating AFF was twofold: to educate Americans and African-American youth and adults with images of Africa, in narrative film structure format with the ultimate goal of promoting awareness, understanding and to increase knowledge of African culture using the cinematic medium.  Secondly, a commitment to develop an international audience for African cinema and to expand the opportunities for the distribution of African films in the U.S. to make African cinema more accessible to various communities that are significantly rooted, like public and cultural institutions. .

“Well, I came to African cinema somewhat out of desperation. Here, in the States, at the end of the 1980s, I felt like the African voice in the Diaspora had become mute,” said Mahen adding that “it seemed like none of us were able to speak intelligently about our homes…I began to feel really desperate. Children were embarrassed to be Africans, adults couldn’t or wouldn’t talk about Africa and the rest of the world merely looked on in pity or in horror. So, you know, out of all this the AFF was born.”

Though it was not an easy task establishing AFF with no money and a typewriter that “ate ribbons” (computers weren’t widely used back then), the idea of an African film festival which started in 1988 – officially became a registered organization in 1990 and held its first major festival in 1993 has mushroomed into a world class film festival, reminisced Mahen.

On April 18, 2013 the festival will move to Columbia University’s Institute of African Studies in Harlem, NY for a  Panel Discussion “African Filmmaking In The Digital Era: Bringing New Audiences to African Cinema” and continues at Maysles Cinema Institute also in Harlem from May 2-6 and culminates at Brooklyn Academy of Music – BAMcinematek in Brooklyn, New York.