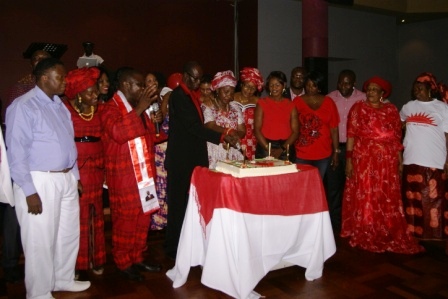 Saturday 9 March 2013 recorded a landmark event in the history of Sierra Leoneans in Australia as they celebrated the 2012 election victory of the All People’s Congress (APC) party of His Excellency the President Dr. Ernest Bai Koroma.  Organized by the party’s branch in Australia under the hardworking and charismatic chairmanship of Mr. James Ibrahim Koroma, the celebrations took off in the Croatian Hall at Punchbowl, a highly populated suburb in the south-west of Sydney. The celebrations, which should have been held earlier, were delayed to take place after the inauguration of President Bai Koroma.  (Photo: Cutting the victory cake)

The party began with a warm-up session of Sierra Leonean/African music as the large crowd of celebrants waited for the more formal part of the evening.  The MC for the evening was Mr. Edison Yongai, who is the chairman of the Association of Sierra Leone Journalists in Exile (ASALJIE) in Sydney and also the convener of the Sierra Leone Radio Programme (Sydney).

In introducing Mr. James Ibrahim Koroma as the chairman for the occasion and president of the APC in Australia, Mr.Edison Yongai said that Mr. James Koroma has been a respectable and learned elder of the Sierra Leone community in Sydney and one of the most zealous party adherents that would rather not compromise the ideals of his beloved APC party. “Turn this marvelous chairman inside-out and you will see nothing but the magnificent symbol of the APC”, MC Edison Yongai said and this was re-echoed with a loud applause from the mammoth crowd of party supporters and well-wishers.  The MC also spoke about the various international and local awards that have been given to President Ernest Bai Koroma’s government for peace, good governance, progress and stability of the country.

In his presidential speech, Mr. James Koroma spoke briefly about the struggles the APC party has gone through over the years in the face of adversity but through which the party has always been triumphant. “Our resilience, our zeal to serve the people of Sierra Leone, our determination for positive changes in our society and our ardent desire to be a party of the people, by the people and for the people have always made the APC the desired party of the people of Sierra Leone…,” and the chairman’s speech was drowned by deafening cheers from the crowd of revelers.

Mr. James Koroma emphasized that the APC is the only party that does not know Temne, Krio, Mende, Limba, Loko, Kono, Sherbro, Fullah, Madingo, etc. and the only party that cuts across all the various boundaries that divide the country. He spoke about the various developmental strides that President Ernest Bai Koroma’s  government has made just within five years of being in political power – the construction and reconstruction of roads, bridges, schools and other infrastructure, the transformation of Sierra Leone’s healthcare system, education, mining, gender equality, the status of the youth, etc.

Chairman James Koroma said President Ernest Bai  Koroma’s APC has been a party of progress, a party of dynamism in every positive aspect of the word, a party of love and peace, the only party capable of holding all the tribes together in a cohesive harmony, the only party and government in the history of Sierra Leone that has given prominence to Sierra Leonean women and youths, the only party in the history of Sierra Leone that has a firm stance against corruption, against human rights abuse, against violence, etc., and the only government in Sierra Leone, if not in the whole of West Africa, that has never detained a political opponent or journalist. “Other governments in the past horrible years in Sierra Leone have repeatedly harassed and locked up journalists and political opponents, including our MC for this evening, and they did it with all delight, which is one reason why some Sierra Leoneans are found in other countries today where they have no desire to be,” Chairman Koroma added.

Speaking to this writer, Mr. Benjamin Sidique (commonly known as Benji), an executive and determined member of the APC Youth Wing (Australia), said the victory of President Koroma and the APC in the last election was the victory for all peace-loving and progressive Sierra Leoneans and urged all progressive Sierra Leoneans to continue to support the party. He called for the youth to take prominent positions for positive changes in the structure of the APC in Australia.

Mr. Mustapha Bangura, who had introduced the MC at the start of the evening’s programme, said the APC in Australia is growing and becoming stronger, which could be judged from the mass  turn-out and unbridled jubilation of people at the victory dance. He said every member of the party is ready to work hard to create a good image of the APC party.

Mr. Edmondson Sonny Cole, who is the chairman of the Sierra Leone Community Council (SLCC) in Sydney and also vice-chairman of the Association of Sierra Leone Journalists in Exile (ASALJIE) in Sydney, said the victory dance was a befitting commemoration of the positive changes President Ernest Bai Koroma and his government are making for Sierra Leone. He added that the APC party in Australia, like any other political grouping, has its ups-and-downs but its successes always outweigh the challenges it faces. Mr. Sonny Cole is also an executive member and one of the founding members of the APC (Australia).

Another committed executive member of the party, Mr.Tamba Aruna, together with his wife Esther Yei Aruna, said Mr. James Koroma’s leadership of the APC party (Australia) has been a progressive and rewarding one over the years. “As he is leaving us now to go back to Africa after staying in Australia for more than a decade and after being a father figure to my family and to all other Sierra Leoneans here, Mr. James Koroma’s leadership qualities should always be recognized and should not be left unrewarded,” Mr. Aruna told this writer. He and his family therefore made a special surprise present to celebrate Mr. James Koroma’s exemplary leadership and a special cake was cut for the occasion, which was shared by all.

One of the hardest working and patriotic personalities in the Sierra Leone community in Sydney, Mr. Raymond Bangura, said, “Sierra Leone after the war does not only need the effort of the government for national development but the effort of all Sierra Leoneans, irrespective of where they live, what region they come from, what tribe they belong to, or what political party they are following.”

Some of the entertainment highlights of the evening were the Sierra Leone Hunting Society mask parade which mesmerized all party-goers and bystanders with their unique rhythmic dance and music. There were also other performances, like the one done by the Koroma Kids Dance Group, which was an outstanding performance by kids barely nine years old. Food and drinks were there in abundance for all to share. All the party-goers this writer spoke to said APC has surely scored another victory.

Party Politics: The Battle For The Soul...