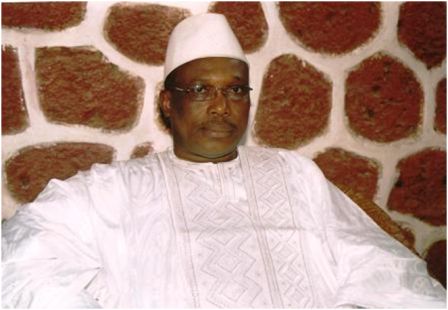 Delivering a keynote address to a jam-packed school auditorium, Ambassador Adikalie Foday Sumah informed the pupils, parents, guardians as well as staff of the school that, the future and holistic development and transformation of any nation is vested in her young citizenry.  Admonishing the pupils to rekindle the educational accolades with which his country, Sierra Leone was once tagged as the Athens of British West Africa, Ambassador Sumah reminded the pupils to henceforth, consider their presence in the sisterly country of the Republic of Guinea, largely for the pursuit of education, skills and training – needed for their personal self-actualisation, and not as refugees any more. That, as Sierra Leoneans their presence in Guinea demonstrates a glaring manifestation of sub-regional integration and cultural interlocks which is one of the components of his President Ernest Koroma’s governance deliverables since his election into office in 2007.

He informed, that the civil war in Sierra Leone was declared over in 2002, thus, signaling the commencement of national reconstruction and national reconciliation.  Since 2007 under the innovative, transformative and inclusive leadership of President Koroma, Ambassador Sumah also disclosed, that the campaign for an Attitudinal and Behavioral Change has revived the hope, confidence and determination of Sierra Leoneans to forge ahead as a nation and that from all indications, the gears are on high acceleration to roll out the Agenda for Prosperity. The envoy reiterated that, having been given the golden opportunity to serve his country by President Koroma in his current capacity, he will work assiduously to continue to do more to help the needy and deserving Sierra Leonean pupils in Guinea.   He expressed optimism, that the pupils will also do more to exhibit discipline and respect for authority in all its forms, and also becoming useful and serviceable to their families, communities and the country at large.

Concluding, Ambassador Sumah informed the recipients and their families that, as a former president of the then Milton Margai Teacher’s College, now the Milton Margai College of Education and Technology, and a pupil teacher of primary and Secondary schools, his political and teaching career apprenticeships commenced at these levels and that his fellow students at the MMTC (MMCET) remain to be his reflection mirror for his conduct in public life.

This is not the first time for such gestures from Ambassador Sumah. During the 2011-2012 academic year, he awarded four scholarships to the Hilary Clinton English Curriculum Taught School in Conakry.  Ambassador Sumah has chosen the award of financial support to pupils offering English and French as Modern Languages since they are the medium of communication among the member States of the MRU.  It is also intended to promote the educational pursuit of pupils from challenging social and economic backgrounds among his Sierra Leonean compatriots and their families in the Republic of Guinea. The ceremony which was commissioned in the office of the Deputy Ambassador, the Hon. Foday Lahai Koroma was witnessed by the current Head of Chancery, Mr. Bai Mansanuntha Thuray, Director of the school, Rev. Sieh Kargbo, parents/guardians and the beneficiary pupils.

Godfather of African Literature, A...