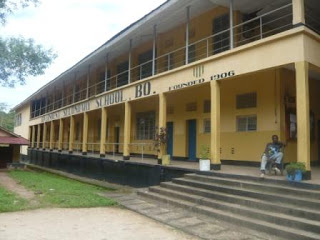 The no-nonsense administration of the Bo School has summarily rusticated a JSS 3 pupil, 13043 Kamara Abdul Aziz who recently stabbed and almost killed his fellow pupil, 12741 Wurie Mohamed. A also of JSS 3.

According to the administration, Abdul Aziz Kamara recently went berserk and used his cooking knife to stab his colleague three times, once in the throat, once in his right side, and once in the left side, almost killing him instantly. The victim, Mohamed Wurie was rushed to the Emergency Hospital in Freetown where he recovered speedily while the perpetrator was dragged to the police and detained for further investigation.

The quarrel which resulted in the stabbing is said to have erupted over a tin of corned beef which the perpetrator was trying to open to eat while the victim was busy provoking him jokingly.  Reportedly, Abdul Kamara threatened to stab Mohamed Wurie if he did not stop the jokes.  Mohamed is also reported to have jokingly threatened to stab Abdul with a broken bottle which he was holding.  Reports furthered that Mohamed playfully rubbed the broken bottle on Abdul who then went mad with anger and stabbed Mohamed three times.

The administration has vowed never to entertain such flagrant barbarism from any pupil of the school, pointing out that Abdul Kamara’s summary expulsion is meant to deter others.