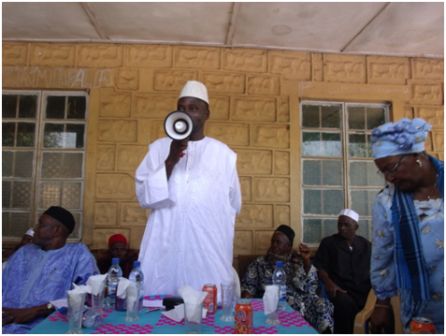 The Minister of Trade and Industry, Alhaji Usman Boie Kamara  (in photo) has made his maiden visit as Minister Trade to the Institute of Advance Management and Computer Technology (IAMTECH), Kissy Dockyard, Standard Bureau and Leocem in Cline Town, East of the capital.

At IAMTECH the proprietor of the AWOL Award winning institution of the year 2012, Professor Paul Kamara, his wife and staff members thanked the Minister for considering the institution shortly after his appointment as Minister.

In her brief but brilliant contribution Dr. Abie Paul Kamara who is described as a role model and founder of the noble institution IAMTECH,  said she was delighted and happy when she first received an official note that the Trade Minister and state officials will be paying them an official visit.

Dr. Kamara said this visit was a great opportunity, not only for her as the proprietress and founder but also for the students that are about to undertake internship and external training in mining institution that is currently a big challenge. She further disclosed that since its inception in 1991 to date, the institution has contributed immensely in championing development at government level and has also empowered the middle man power.

She pointed out that they are the first institution that has undertaken courses on mining and exploration, noting that her dream is to ensure that her legacy becomes visible in Africa. She went to call on the Minister to ensure that mining institution in the country give opportunities to their students that have now enrolled in the institution to develop their potentials.

Several contributions were made by different speakers including the Student Union President, the short but fruitful visit was chaired by the Deputy Registrar, Mr. Alhaji Backarr Kamara.

The Minister also visited the Standard Bureau at Ferry Junction  were he was welcomed by the Managing Director, Mr. James Dumbuya who expressed thanks and appreciation to the government and Ministry for coming to their aid at a time of need.

The Managing Director disclosed that presently they are on the construction of an extra standard lab with a vast difference in the sub-region that is expected to be completed by the end of 2013 through the support of UNIDI and that currently there is a representative assigned to monitor the quality of the work done with super standard.

Mr. James Dumbuya said they are going to ensure that the micro standard laboratory and product certification for all Sierra Leoneans is completed.

However, Mr. Dumbuya said the construction is currently being undertaken by Nimo Construction Firm a household name institution of quality product.

Mr. Dumbuya went on to disclose that very soon they are planning to launch the National Quality Policy by HE Dr. Ernest Bai Koroma through the Ministry. Several contributions were made by different Heads of Department who called for Government’s financial support to the institution.

Dumbuya pointed out that there is porous border crossing points of which over 14 of them nationwide are used to bring in expired products into the country. However, with Government’s approval, he said they are planning to employ over forty Sierra Leoneans to ensure that these routes are monitored 24 hours around the clock.

In response, the Minister urged the Bureau to ensure that products, especially food items entering the market, are thoroughly screened and certified. According to him, the Standards Bureau is an important institution and as such should be seen performing their duties professionally. The Trade and Industry Ministry, he went on, will from time to time monitor the work of the Bureau to ensure a quality job. Alhaji Usman Boie Kamara lauded the company for its initiative to establish new laboratories which he said will help in ensuring that quality work is done.

In a related development, Alhaji Usman Boie Kamara was heartily welcomed by the management and staff of LEOCEM where he also visited.

During the visit the Managing Director of the company, Mr. Arne Birger Johanson raised serious concern over the traffic congestion they are facing, which he said is adversely affecting their business. He noted that 80% of the Sierra Leone Ports Authority (SLPA) has been occupied by BOLLORE AFRICAN LOGISTICS which is making work difficult for them as it poses more challenges.

He called on Government to ensure that proper planning of the ports is done that will ease the current traffic congestion. He further assured the Minister that their products at the moment are one of the best and less expensive. He further raised concern over the challenges they face in running the factory without adequate electricity supply by the National Power Authority (NPA). Mr. Johanson went on to boast that his company pays more taxes to Government as compared to other institutions in the country.

As part of the company’s cooperate social responsibility, Johanson maintained they have constructed a community centre for the people, have awarded scholarships to students/pupils within the community, as according to him education is the key to success.  At the moment, he said, the business is fine as they currently can boast of up to 50 distributors throughout the country.

The MD however stated that shipping their product sometimes costs them US$50,000 a day before, but that the cost has now been drastically reduced to US$15,000 a day. The increase in price of their products is not their problem but that it has to do with offloading cargo at the quay. He however said they are looking forward to the Government to address most of the constraints they as a business people are facing in the country.

In all the places he visited, Alhaji Usman Boie Kamara pledged government’s continued support.  He called on heads of the various institutions to ensure quality work and that he will ensure that his Ministry partners with them.

Governments Can Make Water and San...