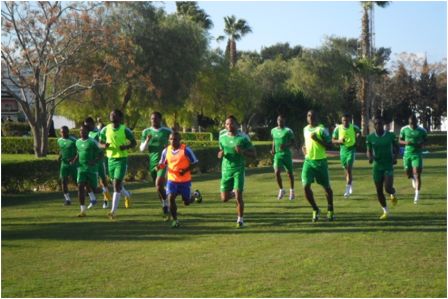 Both Carthage Eagles of Tunisia and Leone Stars of Sierra Leone are in Group B together with Equatorial Guinea and Cape Verde for the Brazil 2014 World Cup qualifiers.  (Photo: Leone Stars players training at the El-Menza Olympic stadium training ground in Tunis (Photo Credit: Mohamed Fajah Barrie))

Tunisia currently top the group with six points from two matches followed by Sierra Leone with four points from the same number of matches played so far in the group.

Cape Verde can only boast of a point from two matches whilst group underdogs Equatorial Guinea have no point from the same number of matches.

The recent FIFA Rankings placed the Tunisians at 44 and Sierra Leone at 63.

Both teams have according to statistics, met thrice in both FIFA and CAF qualifiers.

Ten years afterwards in 1998, Tunisia walloped Sierra Leone 2-0 at home in the first leg of the CAN but unfortunately, there was no return leg in Freetown due to the Armed Forces Revolutionary Council (AFRC) over throw of the then President Ahmed Tejan Kabbah led Sierra Leone Peoples Party (SLPP) Government.

There was a lull in football activities involving the two countries until last year, when both sides face each other in the 2013 CAN qualifiers.

Having gone through series of transformations in terms of players, officials and tactics, Sierra Leone held Tunisia to a 2-2 draw in the first leg third round of the 2013 CAN qualifiers albeit in Freetown, and the return leg ending 0-0 away thus paving the way for the Eagles to be in South Africa for the finals.

In the said match, Sierra Leone at home got the curtain raiser in the seventh minutes and were able to hold the visitors at bay until 25 minutes to full time when Fateh El Ghardi got the equalizer.

Desperate to show pre-eminence at their terrain, Kamara doubled the scores for Sierra Leone to make the score board read Sierra Leone 2; Tunisia 1, seven minutes before the final shriek.

However,  just as the dust was about to settle and thousands of Sierra Leonean supporters preparing to leave the National Stadium to start feral jubilations in the streets of Freetown, then came the bolt from the blue with a quantifiable equalizer by the Eagles’ top scorer Youssef Msakni in the 87th minute that ended the match 2-2.

Already, book makers and international betting companies have tipped the Tunisians as the favourite for Saturday’s third group match in the 2014 World Cup qualifiers. And, although the bettors gave Sierra Leone the win, the average percentage point in 15%.

Even the Leone Stars’ Coach Lars Olof Mattsson is apprehensive the lack of international friendly matches; coupled with the loss of at least five key players to injury, suspension and visa problems is a cause for concern.

He told this reporter: “Tunisia have played nine matches recently and Sierra Leone zero which gives the Eagles added advantage. Also, too much midfielders and attackers with few defenders makes my team unbalanced.”

But, with the high spirit and determination in the Stars’ camp, only the 90 minutes will give the appropriate answer to who will carry the day. 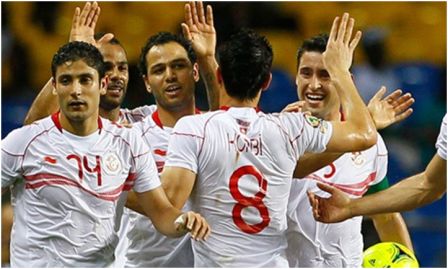