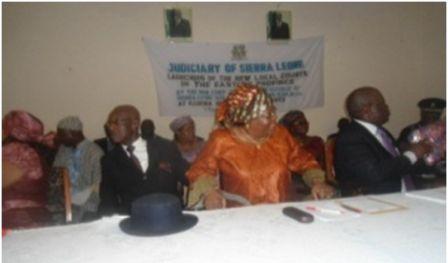 In his opening remarks the Chairman of the program who also doubles as the Provincial Secretary East, George Banya said that local court came into existence since 1896 and it was established to maintain the deterioration of Paramount Chiefs, adding that the local court was under the Local Government Ministry but because it is a court even though it is local, the Chief Justice thought it fit to take it away from the local government and have it under the judiciary of which the staff will now receive salary under the judiciary of Sierra Leone.

In her statement, the Director of the Open Government Initiative (OGI) Madam Khadija Sesay said OGI was established to promote the principle of democracy, strengthen rules of law, human rights, bring the government closer to the citizens, promote transparency and accountability and strengthen the arms of government.

In her key note address, the Honourable Chief Justice, Umu Hawa Tejan Jalloh said the ceremony was an epoch making one in the history of Sierra Leone as it marks the removal of the local court from the Local Government Ministry to the Judiciary of Sierra Leone.