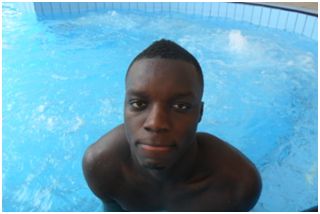 Local Premier League outfit FC Johansen’s George Davies says he is more particular about the experience he would gain than being part of Coach Lars Olof Mattsson’s squad on Saturday 23rd March 2013, for the 2014 World Cup qualifying match against Tunisia in Tunis at all cost.  (Photo: Deen Conteh swimming at the hotel where Leone Stars are camped in Tunis (Photo Credit: James Jamil Fatorma)

Davies 16, also popularly known as ‘Kwaku’ and currently in Accra under the supervision of Manchester City’s Right to Play Academy, said on arrival at the Tunisia Cathrage Airport yesterday, he welcomes the invitation to represent his country.

“Indeed it is a great experience to be part of a team representing my country more especially being together with the big names in Sierra Leone football,” he said.

The player who admitted never playing with the current crop of Leone Stars’ big names in any major local league or competition when asked if Coach Mattsson did not include him in Saturday’s match what would be his reaction fumed: “he is the coach and he decides the players that will fit in his system. For me what is most important is the experience I will gain from the match in Tunisia which as a young player, I think is good for now. But if the coach decides I should be part of the team I will just go out there and give up my best for my country as usual.”

Another youngster Aziz Deen-Conteh from the Chelsea Academy (England), said his call up to the national team is good for his football career.

“Nothing is better in the world for a footballer than playing for your country…it is a honour to have me invited,” he said.

He says he is encouraged by the support he is getting from the back room staff, adding the call up came as a surprise to him.

He added: “I am looking forward to the match which by all indications will be difficult more so against a Tunisian side with wealth of experience in both club and continental football.”

The player said that notwithstanding, his desire is to get a positive result.

Aziz Deen-Conteh has been with Chelsea FC football academy since he was 13 years old and turned 20 in January this year.

Tunisia are currently leading Group B with six points from two matches, followed by Sierra Leone with four points from the same number of matches played so far in the group. 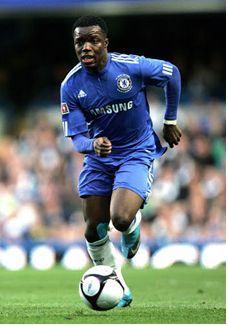