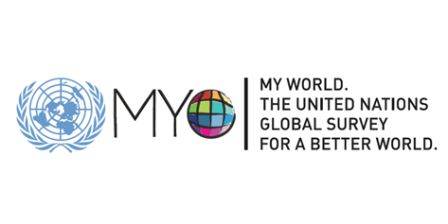 New York, 12 March 2013 – The United Nations and partners invite people all over the world to participate in setting the world’s future development agenda by voting in an innovative survey known as MY World, the United Nations global survey for a better world.

Presented by the UN and partners this week, MY World provides an extraordinary pathway for citizens to have a say in what development priorities world leaders should include in the next development framework.

In a special video message today for the MY World survey, UN Secretary-General Ban Ki-moon encouraged the public:“Vote and tell us what issues matter most to you and your family. Make a difference. Mark a difference!”

The UN continues to build on the momentum generated by the Millennium Development Goals (MDGs), which have already improved millions of people’s lives. However, to confront the persistent challenges that will face people and planet after the 2015 target date of the MDGs, the UN is working with governments, civil society groups, academia and the private sector on the priorities for the next global development agenda.

The MY World survey is one of several tracks available for people to participate in framing the next development agenda. In an effort to further promote an inclusive and open development process, the UN and partners are also engaged in almost 100 national and thematic consultations worldwide, and citizens continue to contribute their ideas and perspectives to the global consultations through the World We Want 2015 online platform.

Votes can be submitted online, and in some countries by mobile phone or through offline ballots. Findings from the global conversation about the future development agenda will be delivered to the UN Secretary-General and world leaders, including the High-level Panel on the Post-2015 Development Agenda, Heads of State and Government attending the opening of the 2013 UN General Assembly, the Open Working Group on Sustainable Development Goals, and other processes.

What are citizens voting for so far?

During an initial roll-out period, thousands of people from 189 countries have already voted for the issues that would make the most difference to their lives. Across all countries and all groups, preliminary results show education is the issue that people think is most important for improving their lives. An honest and responsive government, health, water, sanitation and food security have also been considered major priorities. Better job opportunities rank as an important priority for people living in less developed countries.

MY World has been developed by the United Nations Development Programme (UNDP), the UN Millennium Campaign, the Overseas Development Institute (ODI) and the World Wide Web Foundation in conjunction with IPSOS MORI. For more information, visit www.myworld2015.org. To explore the World We Want platform, visit www.worldwewant2015.org.

Our immigration, our national imag...