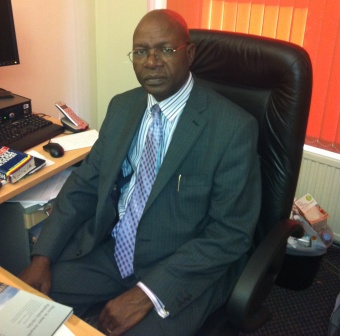 Sierra Leone was represented by the Minister Counsellor and Head of Chancery of the Sierra Leone High Commission to the United Kingdom Sahr Prince Demba, and his wife, Tonda Demba with another Sierra Leonean Fatmata Binta serving as the country’s Flagbearer.

The ceremony was celebrated with a multi-faith observance attended by His Royal Highness, the Duke of Edinburgh.  Also in attendance were the Commonwealth Secretary General, Kamalesh Sharma, High Commissioners or representatives of Commonwealth states in the United Kingdom, Entrepreneur and Philanthropist, Sir Richard Branson, celebrities and other dignities.

He commended the Founder, Imambay Kadie Kamara, whom he said had succeeded in breaking all barriers and exclusions disabled persons face in our community as well as her efforts in promoting human rights.

Demba, on behalf of the foundation, solicited the support of the public, the Sierra Leone Government, the British government and the International Community towards the plights of the disabled.  He declared that the successful launch of the Foundation was a great victory for Human Rights.  The programme was climaxed by various stage performances by Sierra Leonean musicians and cultural groups most of which left the audience spell-bounded.