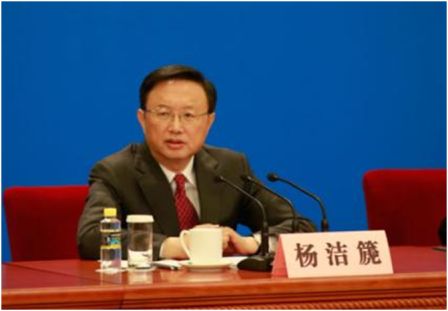 China’s Foreign Minister has said the development cooperation that exists between the African continent and China is one that fits the needs of the African continent, whilst also suggesting, that “all nations must respect Africa’s choice of its development partners’. Yang Jiechi spoke on Saturday, 9th March 2013 in the Great Hall of the People, whilst addressing the media at the sideline of the ongoing First Session of the 12th National People’s Congress.

Minister Jiechi said, has over the years continued to follow the path of development and promised to continue to foster growth with Africa as  they both are now implementing follow-ups on the 5th FOCAC Meeting held last years.  China and Africa, he went on have been cooperating in areas of investments, people-to-people diplomacy and in peace and security amongst other areas whilst stressing that Africans have always looked forward to having development, peace and stability, something China always moved in line with.

China, he went on, has been working towards promoting peace and development in Africa and that “Africans appreciate China’s role in regional and international affairs” further suggesting that the development cooperation between the two fits the needs of the African people. “We hope that all parties can view the cooperation between China and African countries in an objective manner, and respect the African friends in choosing cooperative partners by themselves.”

He also suggested the need for more exchanges between the two and not as much of doubts and finger pointing to the relationship between the two so as to promote peace and development.  Foreign Minister Jiechi also disclosed, that the incoming President Xi Jinping, will be visiting a number of African countries, including Tanzania and South Africa where he will be attending the 5th BRICS meeting to be held in Durban. These visits, he said, will help in demonstrating China’s commitment to building a stronger partnership with Africa especially in building a strategic partnership between the two.

Meanwhile, on the 5th of March 2013, Premier of the State Council, Wen Jiabao gave a report on the work of the government.  Highlight of the report included; a review of the work done in the past five years, major targets and macroeconomic policies for this year’s economic and social development and suggestions for the work of the government. In the report, Premier Wen Jiabao spoke of the need for China to continue “to open up to both developed and developing countries and expand and deepen common interests with all other parties…” He also called for continued efforts in holding high “the banner of peace, development, cooperation and mutual benefit…” and to pursue peaceful development and “adhere to our independent foreign policy of peace; and promote durable peace and common prosperity in the world.” He also called for the need to deepen reform and open up “with greater political courage and vision”

By 1956, China started establishing diplomatic relations with African countries at the ambassadorial level. At the Sino-Sierra Leone framework, both countries have continued to strengthen their ties since 1971 when they entered into diplomatic relations. Areas of cooperation between the two include, but not limited to trade relation, economic and technical cooperation and exchanges and cooperation in the fields of culture, education and health. Both countries have been seeking to adopt effective measures to promote further bilateral trade especially in encouraging cooperation between enterprises from the two countries.

At present, Chinese supported projects in Sierra Leone, include, but not limited to; the Regent-Grafton road; the million dollar new airport project since  the  Sierra Leone Government signed a million dollar agreement with the China Railway International Consortium for the construction of a new international airport in the mainland of Mamamah in the port Loko district. Other projects include the Charlotte hydro dam project and a rice and robber project. By January of 2012, Sierra Leone signed a $1.2 billion land investment project with China Hainan Rubber Group for the development of a 35,000 hectare rubber plantation and the cultivation of rice on a 100,000 hectare farm.  By 2012, there was a 25% shares bought by Shandong Steel Company in one of the country’s iron ore mines which at the moment is operated by African Minerals. There also is the China Friendship Teaching and Referral Hospital and the new Foreign Affairs Ministry building which was all commissioned in 2012 as part of China’s support to Sierra Leone.

At the level of political cooperation, there have been a number of high-profiled exchange visits between the two. From the Chinese side, the most notable visitors were Ji Pengfei, Vice Chairman of the Standing Committee of the NPC in 1978, followed by Vice Premier Tian Jiyun in 1984 and Liao Hansheng, Vice Chairman of the Standing Committee of NPC in 1985.  Also by 2010, the Director-General of the Department of African Affairs of the Chinese Ministry of Foreign Affairs Lu Shaye also visited the country. From the Sierra Leone side, President Siaka Stevens visited in 1973, two years after establishing diplomatic relations. Joseph Saidu Momoh visited twice in 1986 and 1990 and then followed by Vice President Salia Jusu Sheriff in 1989. By 1999, President Ahmad Tejan Kabbah also visited China as it was also the case with the current President, Dr.Ernest Bai Koroma, who visited China twice, first in 2009 and again 2010.

'Private sector must help the...

Sino-Africa, honeymoon in the coming dec...