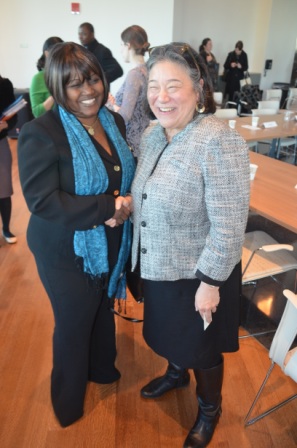 The Sierra Leone Embassy has ably represented the government of Sierra Leone in a round table discussion, on the topic “the Equal Futures Partnership” aimed at advancing women’s Economic Empowerment and Political Participation.  (Photo: Chargé d’affaires Mrs. Sillah in warm hand shake with a top White House official)

She also spoke of promoting Civic Education and public leadership for girls, and reaffirmed  the promise of the equal futures partnership to work geared towards  increasing the ability to access decent work and markets and financial services, increased ownership of productive assets  particularly land and enhanced skills and training including for marginalized women.

Ms. Tchen also recommitted “The Equal Futures Partnership” to increase political and civic participation by women at local, state/provincial and national levels, in both appointed and elected positions and in decision–making processes including for marginalized women.

According to her, federal agencies are launching new efforts to empower domestic violence survivors by helping them achieve financial independence through credit, counseling, micro finance support and education on financial literacy and employment rights.

In the area of Strengthening Support for women entrepreneurs Ms. Tchen said the Small Business Administration, along with other federal agency partners will expand entrepreneurship training programs for women veterans, youth and older women as well as focus new efforts around encouraging women innovators.

“They are dedicating themselves to launching new and innovative programs to support women and girls in STEM fields, connecting women entrepreneurs to markets and supply chains and supporting research to advance girls leadership.

In her conclusion, Ms. Tchen made available Country commitments Guidance to attendees and said respective letters of intent in joining Equal Futures Partnership should be submitted by March 15th, 2013.

“The letter of intent should affirm your country’s commitment to identifying new actions, develop specifically in response to the Equal Futures challenge.  They should include policy, legal and regulatory reforms, and new programs or initiative to address key challenges to women’s political and economic participation in your country as outlined in the concept note.”  Adding, “The letter of intent should also identify the country’s focal point for its effort.”

The able bodied representative of the Embassy of  Sierra Leone Mrs. Sillah informed the august body that she had  already sent the letter of intent, together with an  update on strides made by the Government of Sierra Leone since the creation of the  MDG’s  in 2000 and the challenges encountered  to date and that she will be the focal point to coordinate the equal Futures partnership between the White House and the Ministry of Gender & Children’s Affairs in Sierra Leone.

How We Can Change Our Behavioral A... 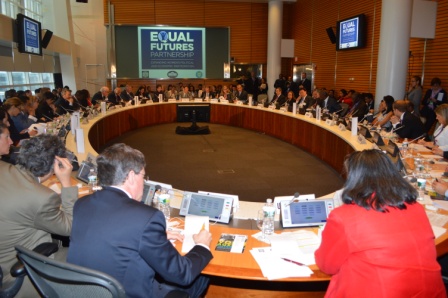 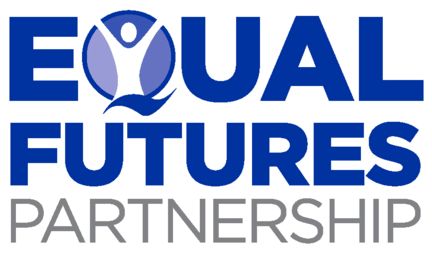