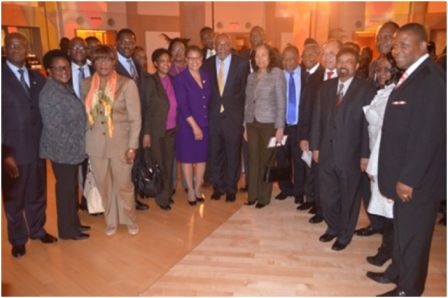 At a farewell reception held in honor of outgoing United States of America Assistant Secretary of State for the Bureau of African Affairs, Ambassador Johnnie Carson  at the Ronald Reagan  International Centre in Washington DC on the 26th February, Carson remarked “Africa has done   marvelously over the past twelve and eighteen months in the area of deepening of democracy and strengthening of  democratic institutions.  (Photo:  group photo of Ambassador Johnnie Carson and Congresswoman Bass (purple) and some distinguish guests)

The out-going  Assistant Secretary of State for the Bureau of African Affairs said “I am responsible for 49 states in Sub-Saharan Africa, and I am pleased that the continent is doing good.

“Across those 49 states, we have 45 embassies and we are promoting economic development, economic reforms, sustained growth and development of Africa’s economies.

“The United States help and partner with Africans to do for themselves by strengthening democracy, democratic institutions and good governance.

“Africa has the capacity to be a major, global, economic player and this in fact should be Africa’s century. “It is the place where people should be going: where they ought to be going, because it has enormous potentials” said Ambassador Carson.

The outgoing Assistant Secretary of State for African Affairs said he is enormously proud of the fact that given his background and experience in Africa, he can’t think of no more an honor than the one he received.

“It is the pinnacle of a long career of working across Africa on both easy and difficult issues – being the administration’s chief policy maker on a day-to-day basis for Africa. It’s an enormous pride that I will always have and take with me.

“My bureau is responsible for on a day-to-day basis for states that are small and island states like Cape Verde, or Comoros, or Sao Tome and Principe, small states in Africa such as Togo, Sierra Leone and Benin and Swaziland and Lesotho, but also the giant states of Africa, Nigeria, with its population of a 150 million people, Sudan,  Ethiopia, countries that are enormous in size including places like the Democratic Republic of the Congo (DRC).

Earlier, several guests including Grant T. Harris – Special Assistant to the President & Senior director for African affairs, Hon. Karen Bass Ranking member House Committee on Africa, Global Health and Human Rights ,Walker A. Williams of leadership Africa USA, members of Congress, and Benin Ambassador Cyrille S. Oguin  shower praises on Ambassador Carson for his dedication of service to the continent while Melvin P Foote & Stanley L. Straughter of Constituency for Africa reflected on the life and career of the Ambassador.

Prior to this, he was the National Intelligence Officer for Africa at the NIC after serving as the senior vice President of the National Defense University in Washington DC (2003-2006).

Before joining the Foreign Service, Ambassador Carson was a Peace Corps volunteer in Tanzania.

Presentation of two meritorious Awards to Ambassador Johnnie Carson and Congresswoman Karen Bass in the full view of members of the diplomatic community including Sierra Leone’s Charge’ d’ Affairs ( ai ) Mrs. Aisha S. Sillah  formed the highlight of the evening.

In Zimbabwe, learning Chinese is a...