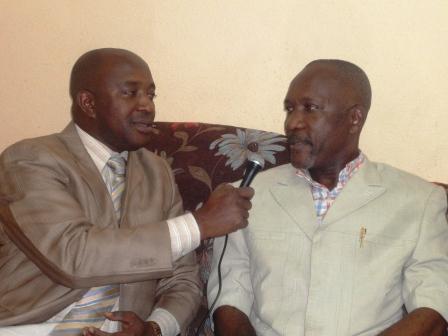 The Deputy Minister is a graduate from the prestigious Nigerian Institute of Journalism and a proud alumnus of the oldest University South of the Sahara, Fourah Bay College – and has travelled to and practiced in several other countries including Ghana, Nigeria, and the UK before he finally returning to Sierra Leone to contribute to national development through his profession.

Hon. Theo Nicol paid an official visit to Saudi Arabia this week – his first official assignment outside Sierra Leone after he was sworn-in at State House a couple of weeks ago. He was here on the invitation of the Organization of Islamic Cooperation (OIC) to attend the Open-Ended experts meeting on the establishment of an OIC satellite channel.

During his stay, he had audience with  the Secretary General of the Organization of Islamic Cooperation, Turkish born, Prof. Ekmeleddin Ihsanoglu, the President of the Jeddah based multilateral development financing institution, Islamic Development Bank, Dr. Ahmad Mohamed Ali Al-Madani, the Director General of the Islamic Broadcasting Union, Mohamed Salem Oud, among  many top level officials. According to the Minister, his meetings with the above-mentioned dignitaries were “very successful” and “good’ for Sierra Leone.

I had an exclusive interview with him on several national issues shortly before he left the King Abdul Aziz International Airport, Jeddah last night. Below are excerpts of the interview.

Good evening, Mr. Minister. I want to congratulate you for your appointment as Deputy Minister.

Mr. Minister, welcome to the Kingdom of Saudi Arabia.

Why are you here, sir? Sierra Leoneans out there would be interested in knowing your reason(s) for coming here.

Thanks for welcoming me to the Kingdom of Saudi Arabia. I am here with Mr. Mohamed Alie Bah, Adviser on ICT Communications, Ministry of Information and Communications, and Alhaji M.B. Jalloh, our Information Attaché here in Saudi Arabia.  We are here to attend the Open – Ended Experts meeting on launching the Organization of Islamic Cooperation (OIC)  Satellite Channel hosted at the headquarters of the OIC General Secretariat herein Jeddah from 23rd – 24th February 2013.

How would Sierra Leone benefit from the just concluded meeting?

I think with the launching of the OIC Satellite Channel, it would help create awareness among Sierra Leoneans about the OIC, its role and activities.

How would you describe your two-day meeting at the OIC?

I think the meeting was very successful and the turn-out was very encouraging. It’s very good that Sierra Leone participated.

I understand that you met with the Secretary General of the OIC, Prof. Ekmeleddin Ihsanoglu, the Director General of the Islamic Broadcasting Union Mohammed Salem Ould, among other dignitaries. Was your meeting with them fruitful?

They were very fruitful meetings. I engaged the OIC Secretary General on President Dr. Ernest BaiKoroma’s “Agenda for Prosperity” and how the organization would come in to make its implementation a success story. With the IBU Director, we started discussing about technical support and training programmes for Sierra Leoneans. But I will report accordingly to His Excellency the President and my Minister about the meetings I held with all these officials.

Is this your first visit to Saudi Arabia? And what have you learned about your visit to the kingdom?

Yes, this is my first visit to the Kingdom of Saudi Arabia and I have learnt that discipline, conformity to law and order and obedience for authority as I’ve seen here, can indeed make a nation great. This is one thing I learnt here and I hope we can take those issues very seriously in our own country.

How would you comment on your appointment as Deputy Minister of Information and Communications given that you are one of the doyens in journalism?

I look upon my appointment first as a blessing from God and the grace of the President for him to have chosen me among many other very competent and hardworking senior journalists in the country. It gives me the opportunity  and privilege to serve my country more in the area of information and I feel blessed that this is just another assignment in my noble profession.

Did your appointment come as a surprise to you and your family?

I will say “yes” and “no”. Yes, because I did not have inkling as to whether the President will appoint me or not until he called me and told me.

No, because I was one of the several journalists who were doing their work consistently and conscientiously and the President was looking for someone from the Sierra Leone Association of Journalists (SLAJ) who was consistent, professional and diligent in his duty to appoint. So it was not a total surprise that he appointed me. My family was however surprised and honoured by the appointment.

As a seasoned journalist expected to be a watchdog in society, what prompted you to leave that traditional role for partisan politics?

It is the duty of every patriot to serve his or her country in any higher capacity. I count myself as a patriot and therefore, after working in the field of journalism for close to thirty years, I thought it was appropriate to get into main stream politics to actualize some of the dreams I have for the promotion and education of my country. Today, I am still a journalist serving Sierra Leone from inside the government.

As a Journalist who had been advocating for the Freedom of Information Bill (FOI), now that you are a Minister, how would you be using your good offices to ensure the enactment of the FOI bill?

We are ready to lobby the MPs in the Legislative Committee to enact the FOI bill as soon as possible. It is now with the committee. My minister and I will soon take the issue up with them.

Mr. Minister, what would you do to revitalize the Sierra Leone News Agency (SLENA) and the Government Information Service (GIS) that are under the purview of your ministry?

SLENA and the GIS are very important wings of our ministry. That is why they were the first agencies or directorates I visited when I assumed office. Both of them are under restructuring with the view to strengthen them and improve their services in the area of news gathering and dissemination.

The Fiber Optic Submarine Cable has finally become technologically feasible in Sierra Leone to help broaden the Information and Communication highway. What will Sierra Leoneans be expecting after the launch of the Fiber Optic Cable?

Sierra Leoneans should expect a faster, more efficient and cheaper internet service now, since we have commissioned the Fiber Optic Cable since  February 20th.

Though I am not that much technically inclined to Information Technology, my basic knowledge tells me that increased diffusion of Optic Submarine Cable uses signals carried by light beams over glass fibers. Does this cable system offer alternatives that were not available on broadcast networks?

It assists our drive to digitalise our broadcasting by 2015 as it is now mandatory for us to go digital by that year.

How determined are you as a Government to ensure that President Koroma’s “Agenda for Prosperity” becomes a success in the next five years?

We are now working on the pillars of that programme. We must ensure it is fully operational in the years to come and that will bring more development into our country. We are fully determined to pursue all the pillars of the “Agenda for Prosperity” and ensure a better life for our people.

Do you think critics are fair with the president when they say that his cabinet is not regionally and ethnically balanced?

It is the prerogative of the President to choose his cabinet. He has done  what he thinks is best for our country. All regions are represented in the President’s cabinet.

Does your ministry have any plans to empower the Independent Media Commission to become more potent in regulating the media landscape of Sierra Leone? If yes, how do you wish to empower it to efficiently and effectively regulate media institutions in Sierra Leone?

The IMC has internal regulations systems. We as a ministry have a representative in the board who attend meetings regularly. We shall assist them in all ways to make them more effective. But their act gives them the full powers to regulate the media without government interference. That is why it is called Independent Media Commission. It is absolutely independent.

As a doyen of journalism, could you tell me about your experience in the profession since you started practicing in Sierra Leone, Nigeria, Ghana and other parts of the world?

It has been exciting staying in one profession for this long and becoming a deputy minister. I had practiced in several countries and it’s been wonderful. What I enjoyed most are the training opportunities I availed myself to over the years.

That’s good, Mr. Minister. Talking about training programmes you availed yourself to over the years reminds me to ask you a question. What are your educational achievements?

I am a well-rounded educated person. Having attended the Albert Academy, Fourah Bay College, Nigerian Institute of Journalism, the LagosCity Computer College and have attended over twenty journalism training programmes in Nigeria, Sierra Leone and Ghana. I hold all the relevant professional qualifications in journalism as well.

Mr. Minister could you please permit me to ask a personal question – Are you married with children?

I am married with three grown-ups.

What’s your message to Sierra Leoneans in the Kingdom of Saudi Arabia?

First of all, I want to thank them for the reception they accorded me during my stay. I have not had the opportunity to visit Riyadh, where most of them live and work due to my tight schedule.But I had the opportunity to talk to most of them on the phone. They have respect for authority. My advice for them is to continue to abide by the laws and traditions of Saudi Arabia and focus on what they are here for. I also call upon those professionals and experts amongst them to try to come home as soon as they can in order to effectively contribute in nation building.

Thank you very much indeed, Mr. Minister for taking out of your very busy schedules to grant me this interview.

It’s been a pleasure, Mr. Jalloh. Thank you for this very unique interview.

School for the blind in Kenema, Si... 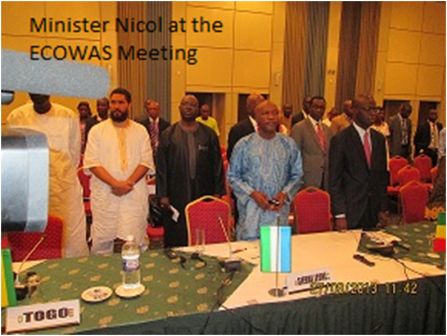