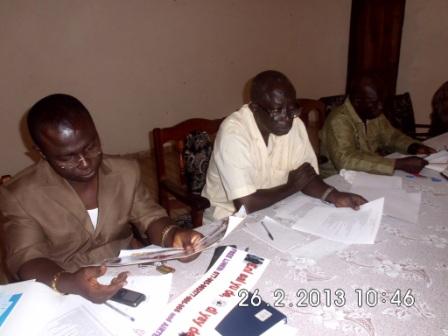 The ACC in Kenema have entreated staff and councilors of the Kenema District Council to say “NO” to corruption by to supporting the national fight against graft. The meeting took place in the conference hall of the council.

Addressing the audience, the Kenema District Coordinating Officer of the ACC, Mohamed Sylvanus Blake encouraged all present to recognize the fight against graft as a national crusade and lend their unflinching support to the ACC. He stated that members of Council as public officers should be aware of what constitutes corruption and stay away from such. He explained the operations of the ACC, the reporting procedures, informant protection and witness reward schemes as a way of encouraging his audience to break the culture of silence on corruption.

Mr. Blake acknowledged the role of councils in the establishment of Integrity Management Committees in all councils by the National Anti Corruption Strategy  Coordinating Secretariat and impressed on the leadership of the council to support the committee to function adequately. He stated that corruption is an issue of integrity and discipline and encouraged all present to put up the right attitude and mentality that will enable them Resist, Reject and Report corruption.

The Senior Public Education Officer of ACC, Mr. Peter Baio Kamara in his statement admonished the audience on some of the practices that constitute corruption as enshrined in the Anti Corruption Act of 2008 and their corresponding penalties. He stated that the fight against corruption is one that the state is determined to win as tremendous successes have been made over the years which has seen the ACC gain recognition. He stated that the 2011 Auditor General’s Performance Audit Report is a wake call for all duty bearers to fasten their belts in ensuring that policies, regulations and laws are respected and observed duly, adding that the ACC will work round the clock to ensure the protection of state resources.

The Chairman of the Kenema District Council, Dr. Senesie Mansaray in his statement thanked the ACC team for the education and encouraged all present to heed to the call of the ACC by staying away from graft. He assured the ACC of his institution’s support and commitment to the national fight against graft.

Similar engagement are anticipated with MDAs in the East.