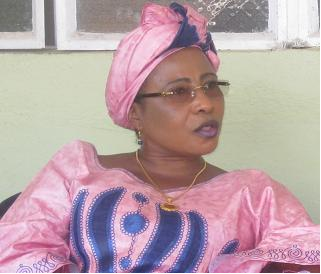 Commissioner for the Domestic Taxes Department (DTD) of the National Revenue Authority, Ibrahim Sorie Kamara has informed Sierra Leoneans, both at home and abroad, that the NRA is always committed to exceeding annual targets as seen in what has been happening in the past four years of the Authority’s revenue collection efforts.  He spoke on Tuesday, 26th February, on SLBC TV’s ‘Good Morning Sierra Leone’ breakfast program, hosted by Sheku Sumiala and Zainab Kamara.  (Photo: NRA boss Haja Kallah Kamara)

The NRA was created by an Act of parliament, 2002 to among other functions, collect revenue for the state. Over the years, the institution has undertaken a number of reforms, aimed at moving in line with international best practice. It  has been implementing a modernization programme which has led to the introduction of the Taxpayers Identification Numbers (TIN),  the Automated System for Customs Data (ASYCUDA ++) and the Goods and Services Tax (GST). It also resulted in the establishment of the Domestic Taxes Department (DTD), the enactment of the 2011 Customs Act amongst others. DFID has been supportive of the Authority’s modernization plan, especially in the reconstruction of customs posts that were destroyed in the border regions of Koindu and Buedu in the Kailahun district, during Sierra Leone’s civil war.

Speaking on the institution’s debt collection plan for the coming weeks, Commissioner Ibrahim Sorie Kamara said, the institution will be embarking upon a debt collection campaign in the coming weeks since they have an obligation at the NRA to collect revenue for the government. “Taxpayers have been complying and some have been doing it voluntarily…” Commissioner Sorie said, whilst also stressing that since 2012, some have not met their tax obligation like filing in  their  tax returns  and that as an institution they have complied data on that and that debts owed them run into billions of Leones .

He explained that there are several instruments they can use in their debt collection campaign. “We can name and shame defaulters…”, he said further explaining that the institution can take court actions against defaulters, or prevent them from  importing and exporting good in and out of the country or preventing defaulters from travelling  or ceiling off  their business premises. Defaulters, he said, ranged from individuals, parastatals, partnerships and organizations. In the area of moving along with new innovations, he spoke about the ASYCUDA system in the operations of Customs as well as plans of “…rolling ASYCUDA to the border posts”

ASYCUDA is a computerized system that apparently helps Customs operations to provide timely, reliable and cost efficient service to stakeholders in the clearance of goods and trade facilitation. Domestic Taxes Department (DTD) is the result of an administrative arrangement, which has succeeded in merging the Goods and Services Tax, Income Taxes and Local Excise Unit of the Customs and Excise Department. Taxpayers are segmented and structured on functional bases rather than tax type.  This merger practically allows greater flexibility, enables better focus on service delivery, and encourages specialization and improved economies of scale. It also helps to streamline and simplify processes and procedures and reduces compliance burden on taxpayers.

Revenues collected by the NRA are placed into the Consolidate Revenue Fund, as dictated by Section 27 of the NRA Act. Such revenues have over the years been used by government in meeting domestic development projects and needs.  Despite the huge successes scored by the NRA in exceeding annual targets in the last four years, it is also faced with the challenge of some taxpayers often trying to evade tax payment. This latest move by the Authority is in line with its desire to always meet people’s expectations and effectively contributes to the Agenda for Prosperity of President Ernest Koroma. It also will give hard and tough times for tax defaulters.