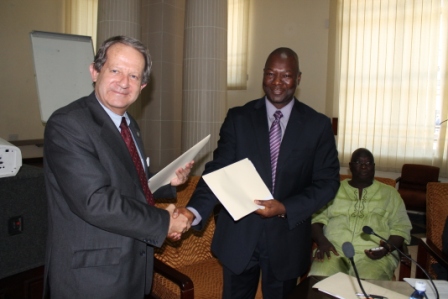 Freetown, 21st February 2013 — The Government of Sierra Leone and the United Nations Development Programme (UNDP) have signed the Country Programme Action Plan (CPAP) at the Conference Hall of the Ministry of Finance and Economic Development, last week in Freetown on the eve of the inauguration of the President of Sierra Leone for his second five year term, agreeing on the strategic priorities for the next two years.

The new Minister of Finance and Economic Development, Dr Kaifala Marah who co-chaired the meeting with the Executive Representative of the Secretary General (ERSG) commended the highly participatory and consultative process between the Government and UNDP that led to the final CPAP document.

The Minister added:  “The days of top-down approach to development is over. Gone are the days when donors design a package for countries to implement. This CPAP document is a demonstration of how true partnership works. The leaderships of both the UNDP and MOFED have been engaged not only in conception and development stage but also in the implementation, monitoring and evaluation stages…”

Dr. Marah concluded by calling on the UN’s continued support “I also now call on the UN and UNDP, through  the signing of the CPAP, to help us achieve our development objectives, to help us deliver the Agenda for Prosperity”

The ERSG and co-chair for the signing ceremony, Mr Jens Anders Toyberg-Frandzen said that  UNDP’s  work in Sierra Leone in 2013-14 is oriented to support the achievements of the MDG as well as the priorities defined in the new PRSP III or agenda for Prosperity and is in line with the overall UN’s 2013-2014 Joint Vision, the UN’s framework of support to Sierra Leone.

The UN boss also noted that the expected drawdown of the United Nations Integrated Peacebuilding Mission in Sierra Leone (UNIPSIL) was a critical factor taken into consideration by UNDP in developing the new Country Programme Action Plan. The potential drawdown of UNIPSIL will have an impact on UNDP in terms of programming and operations but also provides an opportunity for UNDP to support the ERSG the Resident Coordinator, and the UN system in transitioning towards a UNCT-driven approach. It’s expected that UNDP will scale up some of the areas covered currently by UNIPSIL or take on new emerging ones.

UNDP Deputy Country-Director, Mohamed Abchir highlighted some of the achievements of the previous CPAP cycle 2009-2012 to the gathered meeting of various ministries, Government agencies and the media. The achievements include:  a) Managed an election basket fund which channeled technical, advisory and financial assistance: gains in electoral management and mediation of election-related conflicts; b)  Improved access to justice with innovative approaches such as the Saturday Courts addressing the substantial backlog of sexual and gender based violence cases; c) Public sector reform including Diaspora experts, introduction of performance management and performance contracting and technical advice to Government entities leading the reform process; d) UNDP-UNCDF piloted options for local economic development leading to increased revenues in targeted district councils; e) Supported the National Youth Commission to start-up its operations and provided access to income-generating opportunities for over 10,000 young people; f)Supported the establishment of  a cadastre system with the Ministry of Mines and Mineral Resources to boost transparency and revenue collection in a major growth sector; g) Assisted the Government to renegotiate select mining agreements and  negotiate successful Public-Private Partnerships (PPP).