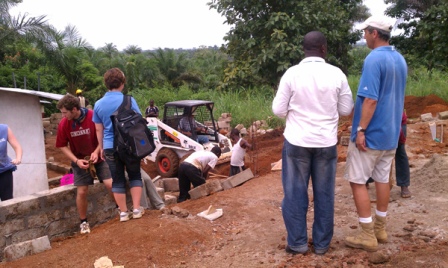 The intention of Ripsta Culture Foundation Sierra Leone in collaboration with Children Crossing Cultures, Suomi Sierra Leone Seura in Finland to start a school for the deprived children in Yams Farms has materialized as a temporary structure has been erected to commence learning with 80 pupils who will be provided with daily feeding opportunities as part of the school activities.

The above mentioned institutions have awarded up to 150 scholarships to deserving pupils in the Western Area and the Rural District communities in Sierra Leone. A team from Finland is in Freetown to assess how the scholarships were awarded; whether they were rightfully awarded to the targeted pupils. However, the team paid assessment visits to all the beneficiaries who received them open-mindedly hoping that more goodies will be showered upon them in the future. Last week, some equipment including laptop computers were given to some of the beneficiaries including the Yams Farms Women Uprising Development Organization.

Leader of the team from Finland, Sorie Obai Kamara, alias Obi- Phrase who happens to be the founder and Director of Ripsta Culture Foundation has said that they are gearing towards promoting education in the country. He expressed that with support from the Finnish Government the Yams Farm school will be face-lifted to accommodate more children in the future. According to him, he and his Finnish wife Barbro Fri-Kamara wish to extend the scholarship facilities to the suburb communities in the provinces where the challenges in terms of education are more prevalent than in the Western Area. He maintained that their projects in Sierra Leone are directed towards the empowerment of women and the girl-child in the country. Obi-Phrase emphasized that they are trying to domesticate United Nations Resolution 1324 and 1820 which give credence to women and girl-child empowerment in the country.

Wife of Obi-Phrase, Barbro Fri- Kamara of the Children Crossing Cultures Finland has emphasized that her organization has vast interest in empowering the children and women of Sierra Leone through the empowerment projects they are here to implement. She expressed the need for the connection of pupils in Sierra Leone with more advanced pupils in Finland. She said after the pilot stage, they will seek support from Finland to extend the project so that more girl-children will be benefited. She admonished beneficiaries to grab the opportunities with care and take advantage of their provisions. As part of the assessment trip to Freetown, Obi-Phrase of the Save Yenga and Guitar Better Than Gun is with Ritva Lonngren who is here to monitor how the scholarships were awarded and Anne Sundqvist another female activist from Finland.

It could be recalled that Children Crossing Cultures together with Ripsta Culture Foundation with other partners are planning to construct a Sierra Leone Finland Tourists Centre in the Peninsular area.