“No democracy without the people” says Alhassan Cole 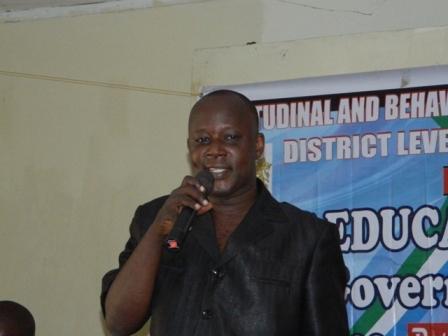 “No democracy without the people” says Alhassan Cole

Chairman Western Area Rural District Council, Mr. Alhassan Cole has disclosed that there is no democracy without the people, as according to him, democracy is the government of the people, for the people and by the people.  (Photo: Mr. Mohamed O. Marrah, Chairman of the programme who doubles as chief administrator)

He made this statement while delivering the keynote address in the civic education workshop organized by the Attitudinal and Behavioural Change (ABC) Secretariat on Monday 28th January 2013 at Western Area Rural District Council Hall in Waterloo.

Members of the high table

The government, he said, has a responsibility to serve the people. “We are not the masters; we are elected to serve and not to dictate to the people,” Mr. Cole emphasized.

He said politicians lose elections because of their attitude towards the people.

According to him, democracy is not only attached to politics. He noted that if everybody accepts and practice democracy accordingly, there will not be any need to preach political tolerance.

Good governance, he said, involves transparency and accountability in all dealings. He furthered that citizens’ participation is also key to good governance. “Good governance should be exhibited by all politicians,” he said, while assuring that the western area rural district council would be very inclusive, transparent and accountable. “Politicians and leaders should be aware of the fact that the offices they are manning belong to the people,” he noted.

He lambasted saboteurs of development, while warning the citizens to desist from acts of frustrating development strides. He called on Sierra Leoneans to compliment the efforts of the government by taking charge of the country’s development.

He described President Ernest Bai Koroma as a role model of political tolerance, noting that the president always endeavors to frown against all forms of political intolerance. He advised the citizens to learn to tolerate each other irrespective of political and tribal differences.

“Until we decide to change our bad attitudes and realize that we are all Sierra Leoneans, the country will not progress,” he disclosed.

He urged the ABC Secretariat to replicate this programme to all the villages in the country.

“Time consciousness is a major key to the success of individuals and nations,” he noted. School going pupils, he said, should serve as models of good attitudes.

The elections, he said, might have ended up with violence if the ABC Secretariat was not functional, while citing the nationwide non-violence campaign that the Secretariat embarked on during the elections period.

The Chief Administrator of the Western Area Rural District Council, who doubles as Chairman of the Ceremony, Mr. Mohamed O. Marrah, described the workshop as very timely and important.

Good governance, he said, means participation, efficiency, responsiveness and inclusiveness. He furthered that political tolerance is the act of accepting and respecting each other irrespective of political affiliation.

He lauded the efforts of the ABC Secretariat for selflessly touring the country to preach against negative attitude. He called on the audience to judiciously utilize the messages they will receive from the workshop.

In his statement, OIC Republic of Sierra Leone Armed Forces (RSLAF), Colonel Bakarr  said the military was created by the national constitution. The role of the military in a democracy is very important. The military, he said, is responsible to protect the territorial integrity and support government to uphold the constitution. According to him, soldiers have no business in politics. “The military is a national asset and not a political party tool,” he said, noting that the military is apolitical.

He assured that there will never be any coup in Sierra Leone again. “The worst democratically elected government is better than the best military rule,” he disclosed.

Fire Force Officer Mr. Simpson B. Tommy said the fire force institution and its personnel are closer to the people than any other institution. Distance and lack of hydrants are among the major challenges faced by the institution, he said. Mr. Tommy suggested that civic education on political tolerance be included in the school curriculum. He called on all and sundry to change their attitudes for the better so the children emulate good traits.

Representing the Muslims, Chief Methemgbeh said politics started during the days of the prophets, noting that Islam has a vital role in the political dispensation. Religious leaders, he said, must take a lead role in preaching against bad governance and enhancing good governance. He said Islam is a role model religion that preaches about submission and uprightness.

Reverend Bismark Kammah, representing the Christians said the only way to successfully achieve democracy, good governance and political tolerance is through attitudinal and behavioural change.

“If we maintain our bad attitudes, Sierra Leone will not prosper,” he said, noting that time consciousness is major to development.

Women’s Group Representative, Mrs. Salamatu Kamara said the importance of democracy cannot be overemphasized, noting that it is only in a democracy that women are allowed space. She expressed happiness that for the first time in the history of the western area rural district council a woman is serving as the deputy chairperson. Everybody, including women, have the right to belong to political parties of their choices, she said, while frowning on men that muzzle the freedom of women. “Let us all serve as ambassadors to preach against negative attitudes,” she admonished.

Youth representative spoke on the role of the youths in democracy, good governance and political tolerance. He advised the youths to kick against violence.

Non Governmental Organization (NGO) Representative, Mr. N’domina said attitudinal change starts with self. Development, he said, should not be left in the hands of the leaders alone, as according to him, each and every citizen has a duty to contribute towards the development of the country. He said it is only when the people pay their taxes that the councils would be empowered to undertake development projects.

Representing the Civil Society, Ms Doris Webber said citizens have a very important role to play in post-election Sierra Leone. She noted that the theme for the workshop is very timely. Elections are gone and the time to work to move Sierra Leone forward is now, she said.

“We must all avoid corruption, tribalism, nepotism and regionalism,” she advised, noting that citizens must uphold the sanctity of the national constitution.

National Electoral Commission (NEC) Representative, Mrs. Rosetta Thomas reiterated that the past elections were widely acclaimed as free, fair, transparent and credible. Democracy, she said, does not discriminate against people. According to her, the law is not silent on electoral malpractices.

Statements were also made by representatives of the All People’s Congress (APC) party and the Sierra Leone People’s Party (SLPP).

At the technical session, Executive Director of the Attitudinal and Behavioural Change (ABC) Secretariat, Dr. Ivan Ajibola Thomas disclosed that civic education is vital for the stability of the country.

He said the ABC is currently embarked on civic education campaigns because it is not included in the school curriculum.

“It is very much important for everybody to know their roles and responsibilities as citizens,” he said, noting that each and every citizen’s role is important to democracy and good governance. Democracy, he said, is the sovereignty of the people.

According to him, Sierra Leone can boast of religious tolerance, but same cannot be said for political tolerance.

Respect and acceptance, he said, go with the tenets of acceptance and respect. The ABC boss said malice and violence are the highest forms of political intolerance.

The ABC Secretariat, he said, does not believe in the myth that Sierra Leone is divided because of the political differences of the citizens.

He furthered that intra and intra political violence must be frowned upon by all and sundry.

He applauded the Chairperson of the National Electoral Commission (NEC), the Sierra Leone Police (SLP), the Republic of Sierra Leone Armed Forces (RSLAF) and the citizens of Sierra Leone for successfully going through the recently concluded general elections.

Sierra Leoneans, he said, don’t want to obey the national constitution and laws governing the land, noting that failure to abide by the laws will result to chaos and confusion.

“If people respect and obey the laws, there will be no need to preach attitudinal and behavioural change,” he said

He stressed that lawlessness is one of the major vices contributing to the backwardness of Sierra Leone.

Dr. Thomas encouraged the citizens to inculcate and imbibe a sense of patriotism and pledge love and loyalty to the nation.

Citizens, he said, must endeavor to promote the good name of the country and defend the state at all times. He further advised that people must learn to respect the rights of others.

“This year, the ABC Secretariat will focus its civic education campaign on the schools,” he ended.

She called on all Sierra Leoneans to always endeavor to endure in the midst of adversity.

To the women, Madam Thomas encouraged them to stand firm and never underestimate their powers.

She cautioned the pupils to desist from actions that destroy their future. She reminded them that learning is better than silver and gold. Education, she said, is the only instrument that will take the pupils to upward mobility.

She expressed thanks and appreciation to each and every person that contributed towards the success of the workshop.

Courtesy of the ABC Communications Office

Agenda for Prosperity – the Sierra...