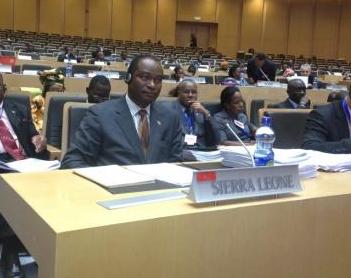 Hon. Dr. Samura Mathew Wilson Kamara, Minister of Foreign Affairs and International Cooperation (in photo) is attending the 22nd Ordinary Session of the Executive Council which is underway in Addis Ababa, Ethiopia.

The confab will be held from 24th -25th January 2013 at the new Conference Centre of the African Union Commission.

The Executive Council is composed of Foreign Ministers of Member States charged with the responsibility of coordinating and making policy recommendations in areas of common interest to the Member States. It is answerable to the Assembly of Heads of States and is tasked with preparing sessions for the Assembly.

The Ministers of External Affairs today commenced discussions on Part B of the document which includes items on which agreement has not been reached by the PRC and therefore require debate by the Foreign Ministers.

Dr. Kamara in conversation with members of the Indian delegation

Dr. Kamara making a point to the Indian delegation

Meanwhile, Dr. Samura Kamara held a bilateral meeting on the margins of the Summit with the Indian delegation led by the Vice Minister of External Affairs, Hon. Sudhid Vyas.

Hon. Vyas expressed his country’s willingness to support any project that meets Sierra Leone’s development activities in areas such as capacity building and training.

Dr. Samura Kamara said the rural electrification project which is being supported by the Indianan Government is a flagship scheme for the country.

He pointed out that 15 women have received training from India, adding that other women will be trained in trenches.

He described the solar project as one of the most successful bilateral projects ever initiated by the two countries.

The duo also exchanged views on the Committee of 10 on the United Nations Security Council Reforms and the position of the L-69 countries.