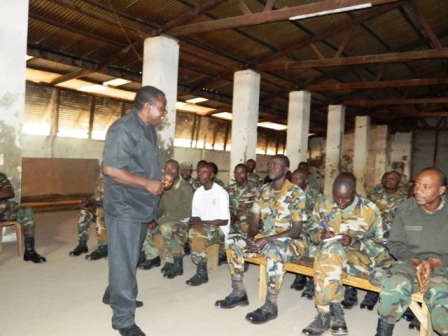 The executives of the Attitudinal and Behavioural Change (ABC) Secretariat stormed the 2 Infantry Battalion situated in the outskirt of Kenema city in the morning hours of Wednesday 9thJanuary 2013 to lecture on democracy, good governance and political tolerance.  (Photo: Executive Director Dr. Ivan Ajibola Thomas lecturing the soldiers on political tolerance)

Dr. Ivan Ajibola Thomas’ presentation to the soldiers took the form of a comparative look at democracy and military rule. He started off by saying it was a pleasure for him to be addressing the soldiers on their rights and responsibilities, as according to him, he was a journalist reporting the war in the company of soldiers.

According to him, people the world over now prefer democracy than military rule. “In other words, democracy is widely accepted, while military rule is frowned upon all over the world,” he pointed out.

Dr. Thomas stated however, that the importance of the military in a democratic dispensation cannot be overemphasized.

“In actual fact, the military is more important and accepted in democracy than in military rule,” he emphasized.

According to him, invoking MAC-P during the elections was a testament to the fact that the government trusted the professionalism of the men and women in combat.

The soldiers, he said, must realize that the rigorous training they went through is not only important for them as soldiers but also significant for them as individuals.

He stated that the President being the Command-in-Chief of the army signifies the importance of the military in a democracy.

He further admonished the officers on the importance of political tolerance, noting that acceptance and respect matters most in politics.

The elections, he said, are over and that all should accept and respect President Ernest Bai Koroma as the legitimate President of the Republic of Sierra Leone for the next five years.

“Failure to accept and respect one another will easily destroy a country,” he pointed out, noting that all should endeavor to accept the outcome of the just concluded widely acclaimed general elections.

The ABC Boss made no secret over the fact that change is a challenge, but encouraged Sierra Leoneans to transform their attitudes from negative to positive for the development of the country.

The military officers, she said, must serve as an embodiment of peace and good leadership. She encouraged the officers to put God first in whatever they do and protect the integrity of the force.

She called on the soldiers to see themselves as an integral part in a democratic dispensation. The President, she said, cannot do the job alone, adding that all hands must be put on deck to move the country.

“Sierra Leone will never develop if the citizens remain lawless; thus the need to fight against lawlessness,” she ended.

In another engagement with staff of the Kenema Central Prisons, the ABC Secretariat also schooled the prisons staff on their rights and responsibilities.

ABC Secretariat Program Manager, Ishmael Cole emphasized that time for politics is over with President Ernest Bai Koroma being the elected President.

The ABC Secretariat, he said, is totally apolitical notwithstanding the fact that it was an initiative of the President.

He encouraged the officers to participate in all public activities and pay their taxes for the country’s development.

He lectured on the importance for Sierra Leoneans to see themselves as one family irrespective of the political differences.

“The fact that nobody has a tribal passport in this country is enough to embrace ourselves as one family,” he said.

Mr. Cole expressed elation over the reforms in the prisons sector over the years. He advised the staff to jealously guard their identities as prisons officers by professionally, religiously and patriotically dispensing their functions.

The reminded the officers that they have a job to reform the prisoners and that they should do it diligently.

ABC Secretariat Eastern Regional Coordinator, Arnold Kaima reiterated that the prisons sector is at the tail end of the justice system but plays a very important role.

“The task of reforming a human being is very herculean,” he noted, adding that change is a major challenge.

Posterity, he said, will judge the officers by the way they treat the prisoners.

The voiceless youths what an oppor...