Open letter to Rev Fr.Natalio Paganelli and all Makeni diocese

Open letter to Rev Fr.Natalio Paganelli and all Makeni diocese

Greetings to you in the Mighty name of the Creator God and a warm welcome to our Diocese and wish you every success in the very important task that led to your appointment. Indeed Rome sees you as an impartial umpire in the game of church politics which beset our Northern Diocese in January this year. The story of what happened is already familiar to you no doubt.

I come from the Diocese of Makeni but currently live in Canada, and like all other diocesan people both at home and around the world, we are very much concerned with the events early January 2012 which culminated in violent demonstrations in the premises of the Cathedral in opposition to the attempted supplanting of the succession to the Makeni bishopric of a priest from another region of the country. It is no secret that this was the work of Bishops from other regions of the country with the strong conviction in the entire diocese that our retiring Bishop of Makeni Diocese George Biguzzi was at the bottom of it all and actually gave his blessing for reasons best known to him.

Well the spontaneous reaction and disruption of what was to be Bishop Biguzzi’s valedictory mass was a manifestation of the people’s resolve and ire. The Diocese felt betrayed by a man they loved, cared for and served so well for 25 years, only to treat the same diocesan people like fools, incompetents and administratively unfit to occupy the seat he once held. Some people were even seen weeping openly and praying over the tomb of the first Bishop Late Bishop Azzolini of blessed memory with arms raised to the heavens, a man they regard as their true father.  The Cathedral was barricaded and no mass was said there on that fateful night.

Anyway, all this is now behind our backs and we look forward to a new future for our Diocese. But one thing I can mention here is people who believe in violence, shall experience violence. Violence is the method the Catholic Mission always employs to get rid of their unwanted servants. So the violence in Makeni that thwarted the bishop’s last mass was justified and will be repeated if need be.  FR Aruna’s consecration may take place in Freetown where he’ll remain Assistant to Bishop Tamba Charles.

Now I want to offer you a piece of advice for your very active consideration; please give serious thought to it, and if makes sense, do some consultations with the Diocesan council and all concerned including all the priests in the Diocese and the aspiring candidates, and perhaps implement.  Look into the possibility of conducting elections now for a successor so that come next year, you already have a name to submit as Bishop-elect  to the Papal Nuncio and ultimately to Rome.  If this can be done in a responsible and peaceful manner, it’ll be kudos to you and the Diocese and you can surely leave with your head up and not down.

We do not want any more controversy or noise in the next round which, God willing will produce our new Papa. We have highly qualified persons among our native clergy with Doctoral qualifications and well over twenty years of pastoral experience who can competently perform the job.

I must highly commend our priests for their composure and display of maturity during those trying moments. Otherwise they could have gone ahead to announce a rival Bishop that night who would have been ipso facto, our Bishop, give him access to his residence and perform the duties of bishop anyway until Rome has a change of mind. But sure, we would have stood our ground and send the message to Rome that we wouldn’t submit to blackmail by anybody nor accept being fooled around.

We do not want another controversy within the Catholic Church emanating from our diocese in Sierra Leone. But this church has had so many controversies in history. We do not want to see the semblance of the 14th century, the era of the Avignon Popes 1309 to 1376 a period which saw seven popes residing in the Avignon in France, arising from a conflict between the papacy and the French crown. I do not want to dilate on this aspect of Medieval European history. But for 67 years, for the benefit of members of Sierra Leoneans, the Popes lived in the Avignon in France.  Again, there was the Great Western Schism 1378-1398 a period which gave rise to a second line of Avignon popes. This schism was finally ended in 1417 at the Council of Constance. The Great schism saw two Popes ruling simultaneously from Rome and the Avignon for a twenty year period.

If we had gone ahead to elect our own bishop, there would have been one in Makeni and another  without a diocese who would never have set foot on Northern soil and would have been Assistant to Bishop Tamba Charles anyway.  Yes out of embarrassment, it would have taken some months for the misinformed Pope to give his blessing and support to the new Bishop. For such good behaviour, our priests and diocesans deserve our kudos and our total respect. The reaction in Makeni showed that any negative test intended to ridicule our Diocese is bound to fail. May God bless our native priests!

As for the Consecration of a new bishop that is to follow, the people of the Makeni diocese would settle well if none of the bishops involved in that madness would stay away. Start thinking about who would travel to Makeni to do the Consecration and avoid the booing that is very likely to greet their presence if they show up. Any bishop unconnected with the mess up will be welcome except that cabal of conspirators of bishops.  You know what they would have said if our people had accepted that nonsense, “it is the power of the Holy spirit”. Well this time, we reject the Holy Spirit. This is what they do to get people into servile submission. The power of the people is greater than the power of the Holy Spirit here on earth and this power shall never again prevail in Makeni. It will remain an idea.

Furthermore the people of the diocese of Makeni have the moral right to declare themselves independent of Rome and start our Native Catholic Church. European history scholars may recall that King Henry VIII of England declared himself Head of the Church of England and stopped the payment of annates to Rome over a dispute over his marriage with Catherine of Aragon.  Next Martin Luther a German Catholic, founded his own Church in Germany, The Lutheran Church over money matters, when the Pope sent a priest Tetzel on a tour of Europe selling indulgences promising eternal life for all who bought indulgences. Luther nailed 95 theses at the church door in Wittenberg attacking the pope for commercialising salvation. He was asked to recant, and when he refused, was declared ex-communicated, Luther immediately started his own church independent of Rome, the Lutheran Church

If need be, I urge the Catholic Church in Northern Sierra Leone, to declare themselves independent of the Roman Catholic Church and start our own brand of Catholicism. We will stand behind them.

Thanks for your time to read this letter.

To God be the glory 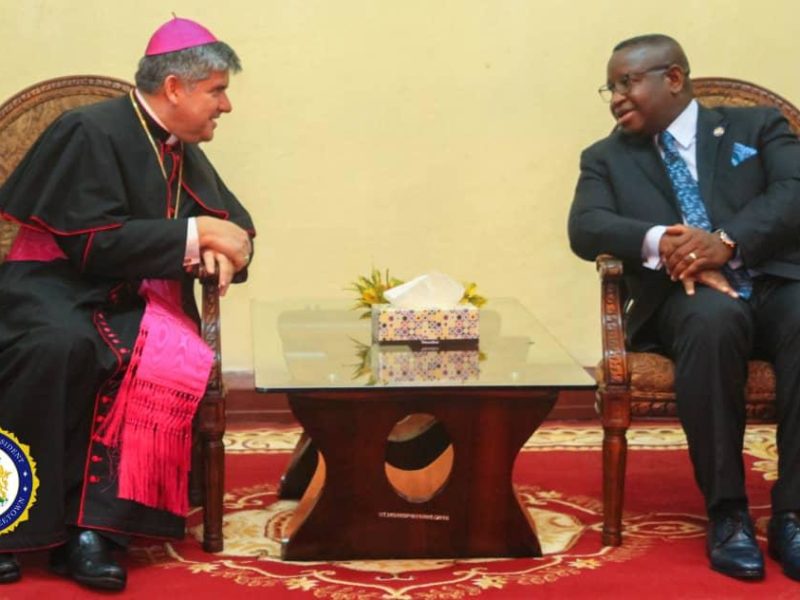