The new fire force transferred to Kenema city in the east of the country is reported to be encountering a lot of problems, prominent among which is the lack of accommodation for the twenty six personnel who are manning the station, Sierra Express Media has been informed.

Explaining their ordeal to Sierra Express Media, the Regional Commander East, Mr. Albert Kainesie at his Kenema city office where he said he is currently dwelling,  revealed that they are suffering from lack of clean drinking water, electricity, and transportation, a situation which he said has the potential to undermine their effective operation in the region.

He however lauded the government for extending the fire force service to Kenema for the first time, and for providing them with a brand new multi- purpose fire fighting engine with a water tank that has a capacity of 13,000 liters.

Revealing that the fire engine will be commissioned soon he explained that they have started using it and that they used it recently to save the Saint Paul’s Cathedral in Kenema from being completely burnt down by fire.

He noted that the best way to fight fire is to prevent it and therefore recommended that the station be equipped with adequate equipment and material to enable them embark on massive sensitization exercise on fire prevention in the region.

“The single fire engine which we have is not enough to fight fire in the entire region, so we need to educate the people on how to prevent the outbreak of fire,” he emphasized.

He appealed to government to supply their personnel with protective gear, medical facilities, and risk allowances, because according to him, fire fighting is hazardous to the health.

This Week In: English Football – U... 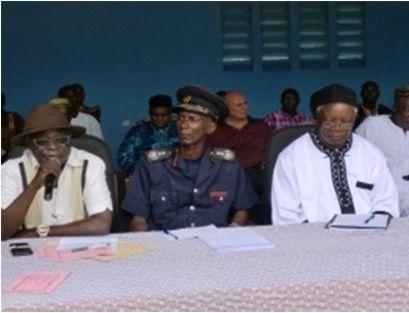