Calling on the global community to join the clean energy revolution, the new UN Initiative under the auspices of Kandeh Yumkella will bring governments, the private sector and civil society together in a meaningful partnership geared towards achieving universal energy access, improving energy efficiency and growing the share of renewable energy – all by 2030.

Underscoring the ambitious yet achievable initiative, Mr. Ban stressed that there is no better person with the requisite leadership skills needed to push the initiative forward than the 53 year old Yumkella who many UN analysts have often described as a rising star for the numerous leading roles he has played within the UN system and the global community. “Providing sustainable energy for all could be the biggest opportunity of the 21st century. It is the golden thread that connects economic growth, social equity, and a climate and environment that enables the world to thrive,” said Secretary General Ban.

Having served as Co-Chair of the High-level Group on Sustainable Energy for All, Chair of SG Ban’s Advisory Group on Energy and Climate Change (AGECC) as well as his active participation as a member of the United Nations Development Group (UNDG), participants at the event overwhelmingly noted that Dr. Yumkella has not only helped to set and coordinate the global development priorities of the United Nations but has played a leading international role in identifying the lack of access to energy as a crucial constraint for development efforts.

For his part, Dr. Yumkella registered his gratitude for the trust and confidence bestowed on him on the new appointment. “I am honored to serve the Secretary General and ready to take this path–breaking initiative to the next level. More than ever, the world needs to ensure that the benefits of modern energy are available to all and to ensure that energy is provided as cleanly and efficiently as possible. Energy is critical for human progress and for the developing world, energy poverty is devastating,” he said.

Pledging to work with all stakeholders “to achieve sustainable energy for all and drive real action on the ground – action that transforms lives, communities, economies and the environment,” the incoming Special Representative of the Secretary General (SRSG) and CEO, noted that Sustainable Energy is a matter of equity and one of urgent practical importance. “We are all aware of the fundamental role that energy access plays as a driver for development, in delivering health, education, food security and economic growth. We need change, and we need it urgently. We can, and we must, give three billion people the chance to build more productive, healthier lives.”

Over the last five years and since the initiative’s official launch in New York in 2011, Dr. Yumkella has, in addition to his Director General responsibilities at UNIDO, advocated passionately with the global community to support Mr. Ban’s initiative on behalf of the world’s poorest.

His leadership and efforts have garnered support from every part of the world including the European Commission and the Clean Energy Ministerial to the African energy ministers and the Small Island Developing states. It has also attracted the voluntary participation of about 60 developing nations.

Moreover, his efforts also led Secretary General Ban to announce at the Rio+ 20 summit held in June that more than USD 50 billion that had been raised from investors and the private sector in support of the campaign’s interrelated and complementary goals of ensuring universal access to modern energy services, doubling the global rate of improvement in energy efficiency and increasing the share of renewable energy in the global energy mix by 2030.

But that is not all. Other highlights of his leadership include tens of billions already committed by various multi-lateral development banks in Asia, Europe and Latin America and the formation of public-private-partnerships on transport, energy efficiency, solar cooking, finance and energy access for the poor.

However, all of these achievements do not surprise those who know him from Sierra Leone and his colleagues in the global development community with whom he has worked over the last 20 years. Friends, school mates and colleagues describe Yumkella as a very humble man who strives each day to live diligently by the quote: “Do not go where the path may lead. Go instead where there is no path and leave a trail.” By accepting to lead this new initiative from the ground up, Yumkella’s pioneering endeavors, love for confronting challenges and “the first” may have begun during his days at university.

During his undergraduate education at Njala University in Sierra Leone, he reportedly held the first position in his class for the entire four year maintaining a grade point average of 5.0 in his first year and never below 4.3 even with his active participation in student union politics and competed in the 400 and 800 meters races.

As a graduate student at the College of Agriculture, University of Illinois Urbana-Champaigne, he was the first Assistant to the Dean of Minority Affairs. Upon graduation, he became the first African or Black faculty member at the Department of Agricultural Economics at Michigan State University.

As the first Sub-Saharan African Director General of UNIDO since 2005, he has led the once moribund agency to global recognition and is the first Sierra Leonean to be Chief Executive of a UN Development Agency and member of the UN’s Chief Executive Board.

Venturing into the unknown to lead the new UN initiative, and charged with fulfilling its mandate including its planning and successful implementation, Yumkella will undoubtedly leave a trail for others to follow. The only problem, his shoes may be hard to fill given his history of successful trailblazing acts. 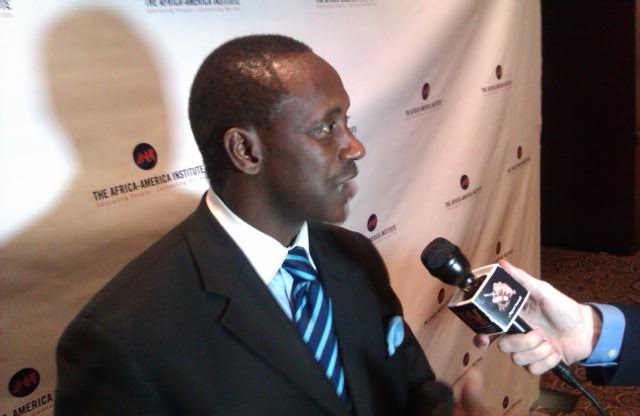